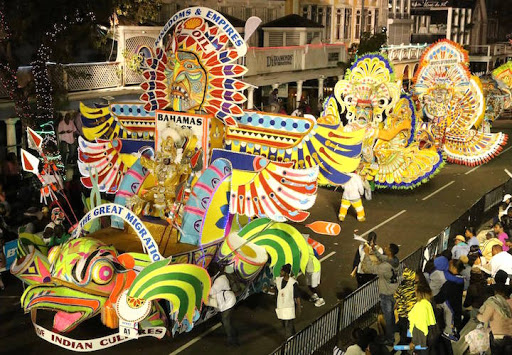 Junkanoo has always been the national celebration that ushers in the New Year; even those that can’t be there in person, tune in on their radio or television sets to watch the musical parade with costumes and dances that woo all in its presence.

Unfortunately, the year 2020 took an unexpected turn. No one could have predicted the severity of the covid-19 pandemic that led to cancellations of many festivals and events across the globe, including our very own junkanoo.

Bay street, which would have been bustling with activity this time of year was quiet and empty aside from long bank lines where people stand with arms crossed inching forward in a slightly disheveled single file.

Walking eastward near Rawson Square with his girlfriend and brother was Florida resident Earl Roberts II. Roberts grew up in the Bahamas, and regularly visits for vacation during the holidays. The young adult says this year, the season feels quite different from what he’s always known.

“This is the first Christmas I can remember that I have come and there’s no Junkanoo. There are no bleachers on bay street. There’s no fence.”

“Businesses are kind of shut down now, so it’s kind of like a different experience coming here for the Christmas time because we’re known for junkanoo so it’s pretty different. It takes some time getting used to” he said.

Typically, on New Year’s Eve, groups would be putting together finishing touches for the big show. Every shack would be packed with builders, dancers, musicians and even some die-hard fans rallying up the groups and assisting them with whatever they need to take home the first-place prize. The big performance is everything.

On the other hand, what takes place after the parade is not so glamorous. Large teams of cleaners immediately fall in; flossing the streets until they are made entirely clean.

Strolling his wheelbarrow along with him as he meticulously scans the sidewalk, Steven Darling points his leaf-blower at every crevice. Darling is one of the dozens of cleaners assigned to the Bay street area for when the festival is over. Seeing the silver lining given the unfortunate circumstance this year, he says it’s great to get a break from his busiest workday.

“People will appreciate it more next year. They will come to Bay street and watch Junkanoo and make less dirt for me; because you know Junkanoo time plenty people come out.”

Bay street also has its popular bus stops where locals and tourists alike congregate hopping on and off at preferred destinations or just enjoying the ride around town. Parked in the bus lane and leaning out the window with his multicolored mask, was bus driver, Ronald Mackey. He says that he’s observed less activity in the area because there was no Junkanoo, but he remains a devoted fan until the parade returns.

“It’s been slow. No fences, no bleachers, no heavy traffic and just slow. Slow moving, everybody still has their (Junkanoo) fans. Valley still got their fans, of course I am a valley boy so, I’m still valley and still pulling for the valley even if they do it virtual or whatever.

Although there was no Christmas or New Year’s Day Junkanoo parades this year, that didn’t stop people from getting creative. Pledge Martin, another bus driver says that one of his neighbors found a way to bring the Junkanoo spirit to their community.

“Last night we were hearing a lot of Junkanoo music. Someone put up speakers and they were playing a lot in of music in the area where I live. So, some people came outside. I came outside and it felt like it was Junkanoo back again; and you know I haven’t been to Junkanoo for many years but that how it was we couldn’t go physically, so we just enjoyed the Junkanoo music that the neighbors were playing in the area.”