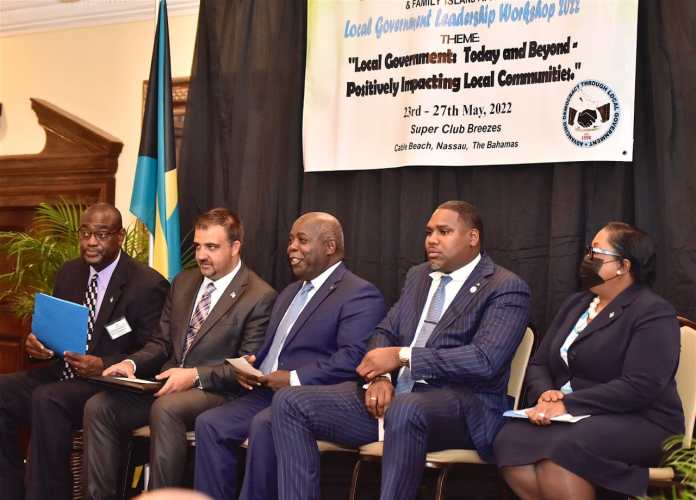 Prime Minister and Minister of Finance the Hon. Philip Davis called on Local Government practitioners to lead the way in embracing major upgrades throughout the islands. His charge came on the heels of delivering his first National Budget Communication entitled – ‘Budget 2022: The Way Forward’ — in the House of Assembly on Wednesday, May 25, 2022.

The prime minister articulated priorities of the government in the budget, which will affect the way Family Island administrators and practitioners conduct business.

The forum, May 23-27, has featured presentations and updates by a number of government departments.

The prime minister said: “I appreciate conferences and workshops such as these as they align the policy objectives of the central government with local communities spread over one hundred thousand miles.”

He then shared with the Local Government practitioners, the three priority areas covered in the budget. They are as follows:

Also, part of his government’s energy sector reform, is to achieve 30 per cent reliance on renewable energy by 2030, the prime minister said. He added, “You can expect new building codes and increased access to affordable housing in addition to increased food security measures, or food import replacement measures, to reduce our food import bill.”

The prime minister also stated that the government has begun the legislative process that will govern how it will leverage and monetize natural resources, to receive carbon credits, and protect the environment.

“These policy measures are significant for Local Government practitioners and Family Island Administrators because much of our natural resources in the blue and green economies exist in and around the Family Islands,” the prime minister said, adding that his government is “moving quickly and decisively in these areas.”

He then revealed that the weekend of May 28 2022, the Inter-American Development Bank would conduct technical assessments for the installation of Solar Photovoltaic Systems in Inagua, Acklins, Crooked Island, Mayaguana, and Long Cay.

The technical assessments are being led by members of the Project Execution Unit (PEU), Reconstruction with Resilience in the Energy Sector in The Bahamas Program (RRESBP), in the Ministry of Finance “so I have direct superintendence of this energy and economic development project,” the prime minister said.

“This transformative initiative is contained in my Government’s Economic Plan and Blueprint to provide renewable and solar energy for the country thereby reducing the country’s reliance on fossil fuel by 30 percent by 2030,” he said. The prime minister admonished the Local Government practitioners that they are on the frontline in leading this transformation, and that he and the minister are counting on their “strong leadership in making this a success.” He said, “Your challenge, however, as Local Government Practitioners is to embrace these twenty-first century changes, but to do so in a manner that you improve your various communities by placing the wellbeing of our citizenry first, and delivering the highest standards of service.”