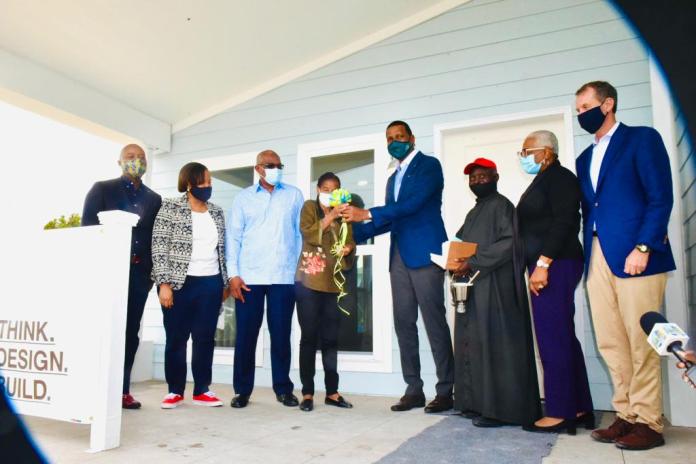 The home was donated by the Beck Foundation, the charitable arm of the Beck Group Ltd, which is led by Bahamian CEO, Mr. Fred Perpall. The Prime Minister said the Government is grateful for the generous assistance of the private sector and non-profits. “Such generosity is a part of a much broader and larger home rebuilding and housing program funded and led by the Government of The Bahamas,” said Prime Minister Minnis. Working with various partners, the DRA has provided 150 temporary housing domes on
Abaco and the Cays, and 20 homes for families at Sweeting’s Cay and East Grand Bahama, noted the Prime Minister.

Two 60-acre sites in Spring City and Wilson City, Abaco, have been identified for permanent housing, and through a public-private partnership with the Discovery Land Company, 46 homes are being developed and will be gifted to 46 families, he added.

The Government is also committed to repairing and providing logistical support to 250 homes in Cooper’s Town, Blackwood and Fire Road, Abaco, said the Prime Minister.

“We still have a long road ahead. But along this road of rebuilding and recovery will be newly restored and new homes for Bahamians,” said Prime Minister Minnis. The Beck Foundation has been involved in restoration efforts in Abaco just days after
Hurricane Dorian. To date they have donated food, clothing, 40 generators, portable water supplies and other perishable goods.

The home is a custom design specifically for The Bahamas and frequent hurricanes, said the Prime Minister. It is also designed to reflect the best elements of Bahamian architecture.

“This home was built for resilience as we continue to rebuild Abaco and parts of Grand Bahama in the midst of the great challenge of climate change,” said Prime Minister Minnis. The 1,250 sq. ft. home has been wind tested to withstand a Category 5 hurricane. It was built by the Beck Group in Dallas, Texas at Factory Blue and then transported from the US to Marsh Harbour. The house was installed in Blackwood by SAGOMA Construction. The total value of the house, including furnishing, fixtures and equipment is approximately $180,000.

“Bahama House represents the quality and kinds of corporate and nonprofit partnerships which are helping to redevelop and to revitalize Abaco after the worst natural disaster in Bahamian history,” said Prime Minister Minnis. “As I noted in the immediate aftermath of Dorian, the unprecedented nature and magnitude of the Hurricane required public/private collaboration and partnerships between The Bahamas and other governments and international agencies.”