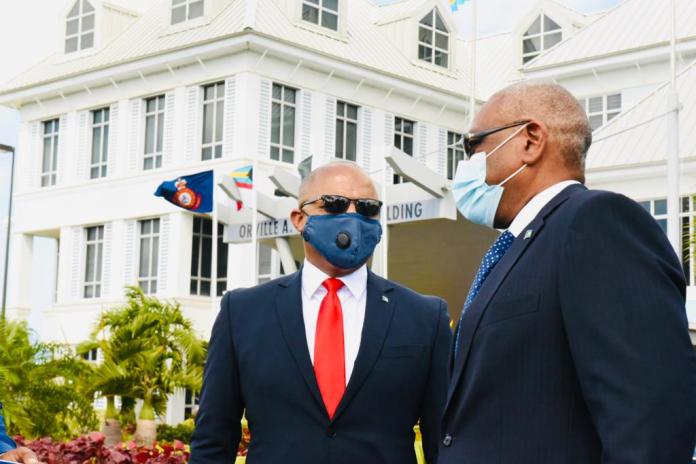 Over the past four years, tremendous strides have been made in reforming the nation’s policing system as part of a comprehensive strategy to address crime and its causes, said Prime Minister the Most Hon. Dr. Hubert Minnis. The Prime Minister was speaking on Monday 22 February at the Inauguration of the Orville Turnquest National Security Building, which houses the Ministry of National Security on John F. Kennedy Drive.

“We have integrated emerging technologies into our policing operations with the introduction of ShotSpotter, Marco’s Alert Digital Billboards, drone technology, CCTV and body-worn cameras and dashboard cameras,” said Prime Minister Minnis. The Real Time Crime Centre was also inaugurated last week. The Centre coordinates assets and directs the attention of resources to high-crime areas, active crimes in progress, large- scale public events that may require law enforcement presence or respose, and high profile or high repeat offenders in the community. The ongoing reform of the criminal justice system is another essential element in addressing crime, said the Prime Minister.

The Government has already started the process of expunging records for first-time nonviolent offenders, and there will be other reforms to make the criminal justice system more effective, fairer and more just, said Prime Minister Minnis.

“Even as we are tough on violent offenders, our criminal justice must also be committed to restoration and rehabilitation,” said the Prime Minister.

“Tough on crime and its causes does not mean that the foundation of our justice system should be based on a punitive mindset.”

The Prime Minister said the Government’s comprehensive approach to crime must continue to include improved policing and the ongoing reform of the country’s courts and corrections system. He noted that the Government is committed to a new Supreme Court complex that will be built at the site of the old General Post Office, which has been demolished.

Prime Minister Minnis thanked the Royal Bahamas Police Force and Royal Bahamas Defence Force for contributing to the decline in crime in various areas over the past several years. The Prime Minister said that the Orville Turnquest National Security Building will play an essential role in the strengthening and further coordination of the country’s armed forces.

The four-story 70,000 square-foot modern structure is comprised of an east and west wing to accommodate each of the armed forces.

“It is fitting that this building is named in honor of one who has given such service to The Bahamas throughout his lifetime,” said Prime Minister Minnis. Sir Orville, who watched the ceremony from his home, was the fifth Bahamian Governor General in an independent Bahamas and served in a number of areas in public life, including as Minister of Justice and Foreign Affairs and as Attorney General and Deputy Prime Minister.

“As those of you who will work in this building and walk these halls, may you follow the inspiration of Sir Orville who remained steadfast in his commitment to our national good,” said the Prime Minister.