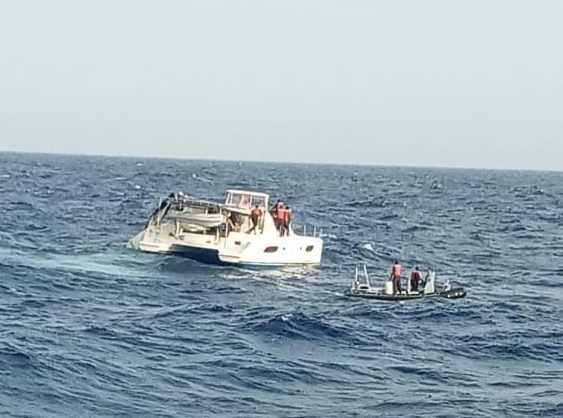 Three occupants of a disabled vessel are grateful for the assistance of members of the Royal Bahamas Defence Force after they were safety escorted to harbour in the southern Bahamas early Tuesday morning. After receiving a distress call on Monday morning of a vessel which was experiencing mechanical problems 12.5 nautical miles north east of Planta Cays. HMBS ROLLY GRAY, under the command of Lieutenant Themo Berkley, was called upon to assist. On arrival, they discovered a white 44-ft Catamaran with a broken mast adrift in the waters.

The boarding team immediately cut the riggings and lanyard of the vessel, and also assisted with additional fuel. The vessel and its occupants were eventually escorted into Landrail Point, Crooked Island, shortly after 5:00 am Tuesday. The Royal Bahamas Defence Force remains committed to protecting the territorial integrity of the Commonwealth of The Bahamas.