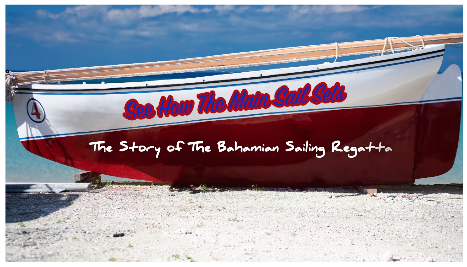 From highly-acclaimed Bahamian Producer-Director Charlie Smith, a.k.a. Charlie Bahama and Executive Producers Fred Munnings and Nadir Hasan comes See How the Main Sail Sets, a documentary on the history of the National Family Island Regatta and chronicling the legacy of sailing and boatbuilding in The Bahamas.

See How the Main Sail Sets is an upcoming feature, shot across many Family Islands and is a full-length documentary under the patronage of The Bahamas Minister of Agriculture, Marine Resources, and Family Island Affairs the Honourable Clay G. Sweeting. See How the Main Sail Sets will make its world premiere at the Fusion Superplex in Nassau, Bahamas on January 18th, 2023 at 7:00 p.m. It’s a revealing and timely documentary exploring the global uniqueness of Bahamian Sloop Sailing and highlighting Iconic Sailors and legendary Boatbuilders during The Bahamas’ 50th Independence Anniversary celebrations.

Commodore Strachan said, “See How the Main Sail Sets is amplifying the national and global conversation around sailing and boatbuilding in The Bahamas and is the precursor to the government’s eventual declaration of Sailing as the Official Sport of The Bahamas.”

He also spoke of how sailing and boatbuilding are highlighted in the documentary “as significant contributors to the cultural, civic, economic, lifestyle and recreational aspects of regatta events across the archipelagic nation.”

He added that the goal of the documentary is to present an accurate and factual account on the origins of Sailing and Boatbuilding in The Bahamas and aid in launching a new era of tourism development and promotion by spreading the word that The Bahamas is more than an attractive destination but an welcoming and attractive archipelago of 700 islands of warm, hospitable and fun-loving people.

The documentary also focuses attention on the ingenious ways by which females and youth are associated and contributing to the sport while underscoring how developing skills, drive, intellect and vision are disrupting the male-dominated industry.

Mr. Smith also provides convincing narration as the documentary’s solo narrator coupled with expert voice clips from many of the Bahamas foremost experts in Bahamian Sloop sailing and boatbuilding.

Mr. Munnings said, “It is an honor at this historical juncture to debut the documentary as the Nation approaches its 50th Independence Anniversary Celebration and the 69th National Family Island Regatta. The Regatta Executive Committee, Commodore Strachan and the Documentary team are humbled by this opportunity and we look forward to sharing the film with domestic and global audiences.”

The official release date of See How the Main Sail Sets is after April 18, 2023 and will be released with the theatrical cut as well as the director’s cut.  The release copies are available in locations upon completion of syndication and distribution rights agreement(s).