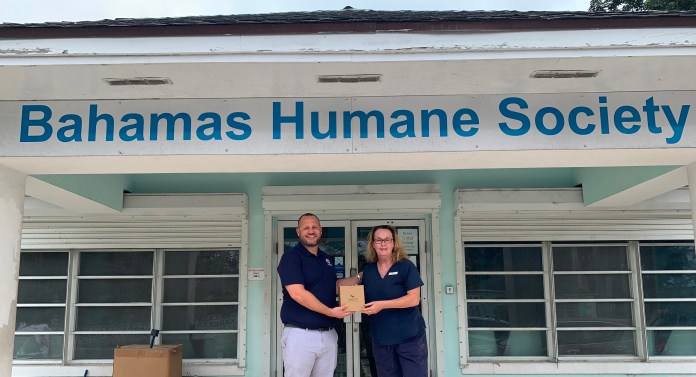 Last October, the Bahamas Humane Society was greeted by some unwanted visitors – and we’re not talking about animals. The organization that shelters hundreds of animals in need of care was ransacked by thieves, leaving the facility in shambles and fear in the hearts of employees.

Less than a week after seeing news that the animal rescue and protection facility had been burgled and vandalized, The Amoury Company, a tech company focused on B2B solutions, offered to step in to help, replacing surveillance cameras to bolster security and provide monitoring. Last week, Amoury completed the final stages of installation, equipping the Humane Society with a video cloud surveillance system including 30 cameras, and a year’s monitoring free of charge, a donation of $25,000.

“It is heartbreaking to know that the organization was left in such a vulnerable state after the break-in,” said Jonathan Cancino, Vice President and General Manager, The Amoury Company. “We are excited to make this donation toward this much-needed cause in the hopes that it lightens the incredible financial burden that, I’m sure, the invasion compounded. With crime as it is, video surveillance systems are critical to deter activity, protect property and assist law enforcement in its investigations when an incident does occur. This donation is the first of its kind for our company and we look forward to more ways we can assist.”

“The Bahamas Humane Society is an organization that assists the community greatly and we were so disappointed after this most recent burglary during which our camera system was stolen and our offices were trashed,” said Percy Grant, General Manager, Bahamas Humane Society. “I was excited and grateful when The Amoury Company expressed their generosity especially in our time of loss.”

The donation was made possible in part by the Drako Cloud Video Surveillance Grant which was originally introduced in the United States for schools as an added asset to existing surveillance models. The grant valued at $1,000,000 allowed for the implementation and operation of security equipment and cloud recording services. Schools that were grant recipients received a full year of the Eagle Eye Cloud Video Management System (VMS) which included cameras, gateways, cloud recordings and centralized management.

A few years ago when the grant was initially introduced to the Bahamian market targeting local government schools, there was little traction, possibly due to the immediate pressure and onslaught of the pandemic. With little inroads made, but knowing the many benefits and savings the grant provided, Amoury was determined to make it work. With approval from their partners, Amoury customized the grant for the local market to assist the Bahamas Humane Society with a commitment for future grant monies geared towards schools. The Bahamas Girl Guides Association will be the second recipient of the grant.

The relationship between Amoury and the Bahamas Humane Society will be ongoing as the former will provide overall management of the system including data storage in the cloud with alerts provided in the instance of unusual activity.

Persons interested in making a donation to the Bahamas Humane Society can: