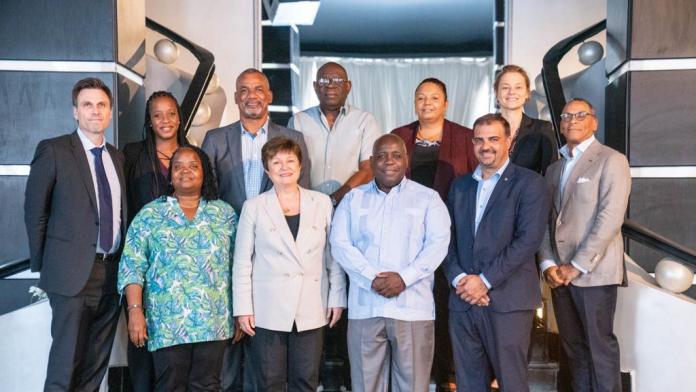 The Prime Minister arrived in Sharm El Sheikh, Egypt, ahead of the United Nations Climate Change Conference, COP 27. The Prime Minister met with Kristalina Georgieva, Managing Director of The International Monetary Fund, in his first bilateral meeting of the trip to discuss climate financing, carbon credits, and funding for the loss and damages associated with climate change.

The IMF has created a new $40 billion fund, the Resilience and Sustainability Trust, to address the impact of climate change on small island countries.

This is a big step forward. The IMF Managing Director described the fund as representing the first-ever long-term concessional capacity to support countries vulnerable to climate shocks, including — crucially — middle-income countries like The Bahamas. During the bilateral meeting, Prime Minister Davis emphasized the importance of fair climate finance and the opportunity that COP 27 presents to define a finance mechanism for loss and damages with global backing and support. The Prime Minister highlighted the negative impacts of climate-related shocks on the Bahamian economy and how the increased frequency and intensity of hurricanes have increased the national debt significantly and made borrowing more expensive.

During the dialogue, the Prime Minister and the IMF Managing Director discussed the steps The Bahamas is taking to research and develop blue carbon credits and how the country can maximize the benefit from those credits.

The Prime Minister has emphasized the role carbon
credits can play in transitioning The Bahamas to renewable energy.

Mrs Kristalina Georgieva echoed Prime Minister Davis’ call for more robust involvement and scaling up of private investment in climate-related financing funds. A blend of public and private investment can be useful for de-risking investments in mitigation and adaptation.
The Prime Minister welcomed the IMF’s continued support for his efforts to build a strong coalition to combat climate change.