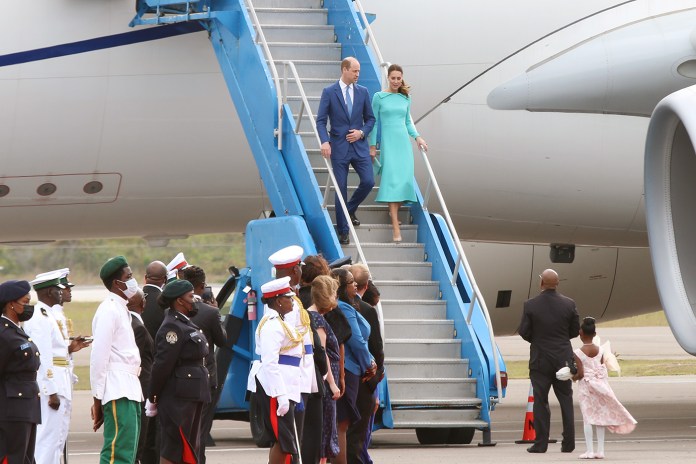 The Commonwealth of The Bahamas welcomed Their Royal Highnesses, The Duke and Duchess of Cambridge on an Official Visit for the Occasion of Her Majesty The Queen’s Platinum Jubilee celebration, 24 to 26 March, 2022. Prince William, the Duke of Cambridge, and his wife Catherine, the Duchess of Cambridge, arrived onboard the RAF Voyager, which touched down today at about 4:25pm at Lynden Pindling International Airport to partly overcast skies and tropical breezy conditions.

It was a brief ceremony, but laced with the traditional pomp and pageantry befitting such occasions, inclusive of The Royal Salute, Inspection of the Guard, and the Playing of the National Anthem – ‘March On, Bahamaland.’ As the Royal couple disembarked, they were greeted by His Excellency, the Most Hon. Sir Cornelius A. Smith, Governor General of the Commonwealth of The Bahamas. There were also, Deputy Prime Minister and Minister of Tourism, Investments & Aviation the Hon. Chester Cooper and Mrs. Cecilia Cooper; Her Excellency Leslia Brice, Bahamas High Commissioner to CARICOM; and other officials.

Aniah Moss, 8, a grade-two student of Xavier’s Lower School, who was dressed in a blush-coloured dress, presented a bouquet of flowers to the Duchess. She was elegantly adorned in an aquamarine-coloured dress, a tribute to Bahamian waters. A curtsy and handshake and warm smiles were exchanged between the two. The Governor General then escorted the Duke of Cambridge to the right of the Saluting Dais, while the Duchess of Cambridge stood to the left. This was followed by the playing of the National Anthem by the Royal Bahamas Police Force Band, after which the Duke conducted the Royal Salute and Inspection of the Guard.

The Governor General, Their Royal Highnesses and other dignitaries were then whisked away in electric vehicles in a police-led convoy to the Office of the Prime Minister, for a Courtesy Call with Prime Minister the Hon. Philip Davis and other officials. The Commonwealth of The Bahamas gained independence from Great Britain on July 10, 1973, but remained a member of the 53-member Commonwealth of Nations, with Her Majesty Queen Elizabeth II as head.

It was the first Royal Visit for the Duke and Duchess of Cambridge to the region, which started on March 19, 2022. The tour took place against the backdrop of small groups of anti-monarchy protesters in Belize and Jamaica, prior to visiting The Bahamas. The Bahamas tour is expected to take in cultural expressions, a visit to the Garden of Remembrance to lay wreaths, visit to Sybil Strachan Primary School, Regatta at Montagu foreshore, the Governor General’s Official Reception; visits to the Hurricane

Dorian memorial site on the island ofAbaco, and the Children’s Home and Coral Vita in Grand Bahama.