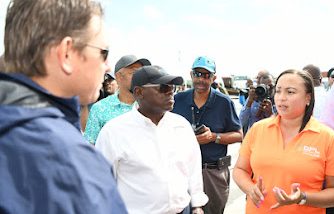 Acting Prime Minister Cooper said the presence of the full team of government officials in Abaco, was an indication of the Government’s commitment to, and support of, all citizens of The Bahamas who may have been placed in vulnerable positions.

“We will continue to do some assessments but so far, so good. It looks like we have been spared from the worst of it,” Mr. Cooper said, following a stop at the Friendship Tabernacle Church, which served as a shelter, and accommodated more than 200 persons. The Church is headed by Pastor Silbert Mills, and was one of several shelters the team visited.

“Having gone through Nicole, we recognize that we are a resilient people; our infrastructure is fairly resilient as well. We have been protected for the most part, having not seen any serious damage or injuries or fatalities.

“We are grateful to Pastor Mills, the local community, and Local Government. During times like these, we come together, we rally together and support each other, that is what we do as Bahamians; we remember our assignment to be our Brother’s Keeper and I think that is how we are able to persevere. That is what is keeping us strong and protected as a people working together.”

The Acting Prime Minister said while there is an additional need for investment in infrastructure, in addition to the Port, and an “ever-pressing need for more housing” in the aftermath of Hurricane Dorian in 2019, the Administration has been making “significant efforts” through the Department of Housing to address the housing needs left behind in the wake of Hurricane Dorian.

“We still have some government employees, civil servants, who are living in the trailers nearby the Government Complex. We know that we have been making significant efforts through the Ministry of Housing/Department of Housing and my colleague Coleby-Davis (Minister JoBeth Coleby-Davis) has been doing a great work to really do PPPs (Public Private Partnerships), but being here today and seeing the number of persons who still live in the trailers is a reminder of the large quantity of housing required here and the government will continue to put its efforts behind these initiatives,” Mr. Cooper said.

“I think that is what is going to really catapult the growth, the rebirth, the re-development of Abaco, is when we can find places for workers to live. People can return home and contribute positively to the overall economy.”

With regards to the need for additional investment in infrastructure, the Acting Prime Minister said: “We have looked at some of the infrastructure here, there is need for some upgrades. We continue to do repairs to the airport since Hurricane Dorian. We are pressing forward there. We are going to move the Air Traffic Control Tower to a different location, the professionals determined that it ought not to be built where it is so that is a project we are working on. Other remedial works, Parliamentary Secretary (John) Pinder has been driving for us and we continue to press forward to bring it back up to standard.”

“We are posting very, very strong numbers for tourism,” Mr. Cooper said. “I suspect that this year we are going to meet or exceed 2019 levels, the Stop-over numbers in particular look really good. The message to the world is that Nicole has passed and we are open for business. This is the message that we have sent during our missions. Sometimes you watch Weather Channel or international media and there is a hurricane in Abaco or Grand Bahama and you are thinking The Bahamas is destroyed, but we sent a message that we are a sixteen-island destination and even during the worst of Hurricane Dorian, we still had 14 vibrant destinations that people could visit.

“There is always some anxiety about hurricanes and this is why September/October tend to be slow months because people are very concerned about hurricanes but the message will be that Nicole has passed, we have an “All Clear”, there has been very minimal damage to the tourism infrastructure and the infrastructure on the whole and we are ready to welcome more guests here,” Acting Prime Minister Cooper added.