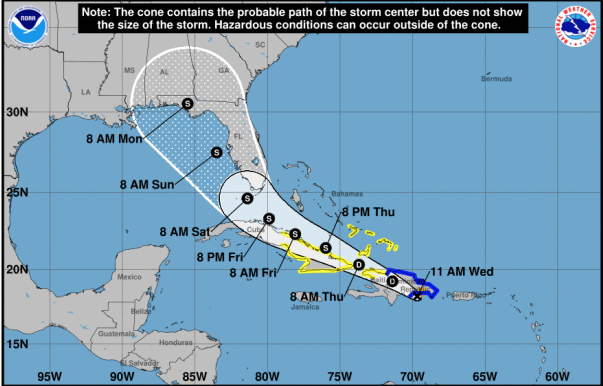 Center of Tropical Storm Fred close to the Southern Coast of the Domican Republic.

A tropical storm watch remains in effect for the island of the Southeast Bahamas. This includes the islands of Inagua, Mayaguana, Acklins, Crooked Island, Samana Cay, Long Cay and Ragged Island, and the Turks and Caicos Islands.

Fred is moving towards the West – Northwest near 16 mph and general West- Northwestward motion with a decrease in forward speed is expected to continue for the next few days. On the forecast track, the center of Fred is expected to be near or over Hispaniola this afternoon and evening, move near the Southeast Bahamas and the Turks and Caicos Islands as a Tropical Depression on Tursday and move North of the Northern Coast of Central Cuba on Friday.

Maximum sustained winds are near 45 pmh with higher gusts. Weakening is expected while the system interacts with Hispaniola today. Tropical storm forces winds extend outward up to 60miles mainly on the Northeast of the Center.

Residents in the Southeast Bahamas and the Turks and Caicos Islands should continue to make preparation for the possibility of Tropical Storm winds beginning late tonight. Residents in low – lying areas should also prepare for heavy rainfall for 1 to 3 inches with isolated amounts of 5 inches.

Ms. Adrana Lockhart presented a copy of her book to the Governor General