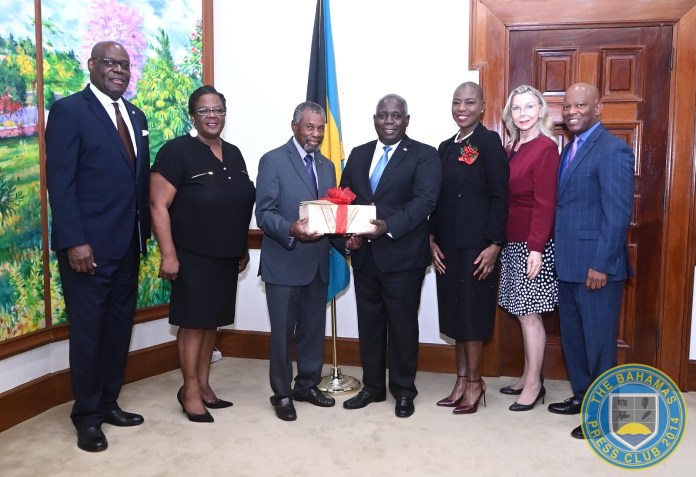 NASSAU, The Bahamas – Members of The Bahamas Press Club 2014 paid a Courtesy Call on Prime Minister the Hon. Philip Davis and congratulated him on his election win.

Prime Minister Davis said he understands the importance of the fourth estate adding that he sees the Press Club as an important part of media support.

“I endorse honest and fair reporting. The PLP has always been held to a different standard in the media than other parties. I support non-governmental organizations that strengthen democracy and represent the common good”, said the Prime Minister. Press Secretary Clint Watson said he sees the Press Club as a bridge between the next generation of journalists and the principles upon which journalism in The Bahamas were built.

“We must ensure that there is training and that we don’t lose the institutional knowledge that’s been built over the years. I commit to working with the Prime Minister to assist you in finding a home for the press club”, promised Watson. The Press Club intends to host a number of seminars next year including one on ethics in reporting.

Capron said the Club’s media awards ceremony was sidelined because of the pandemic but hopes that it will return next year. He invited the Prime Minister to be one of the speakers at the event.

Local press clubs were founded in the 1970s, and revived in 1996. The Bahamas Press Club was reestablished 2014, and incorporated in 2019. In attendance at the meeting were executives: Anthony Capron, President, Anthony Newbold, Immediate Past President, Lindsay Thompson, Secretary and Members Serena Williams, Kermit Taylor, and Shelly Lewis.