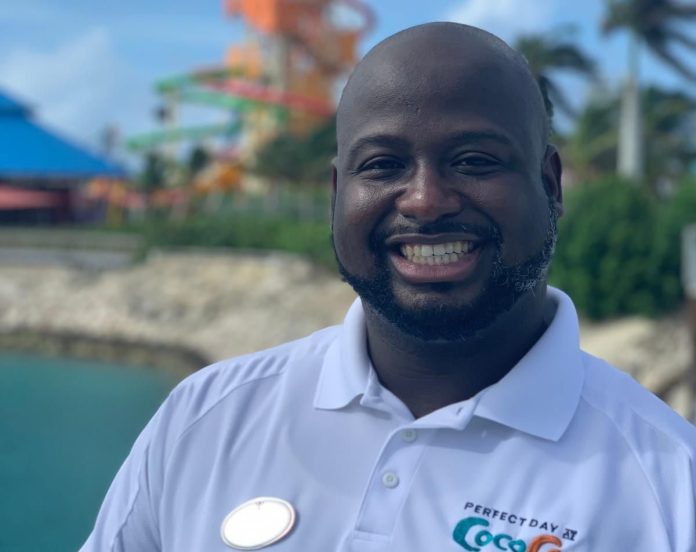 When Leslie Gibson accepted a position on Royal Caribbean International’s Perfect Day at Coco Cay during the height of the COVID pandemic, he didn’t imagine the opportunity would lead him to his dream job.

“The craziest thing is that what I’m living now, I dreamt about,” said Gibson, who is now based in Miami. “I studied engineering, but I prayed for a job where I would be traveling and working outside of where I’m from. I love The Bahamas and I’m always ready to go back home, but I’ve always wanted to get more exposure, see the world and all it has to offer. And Royal has been able to provide me that.”

Gibson said he found his footing in human resources after friends and family saw his natural affinity for working with people and problem solving.

Gibson began his journey with Royal Caribbean as a human resources specialist on Coco Cay in June 2020, where he worked for 11 months before he was selected to move to corporate and take on a larger scale of recruiting for private island experiences around the world, a role that has expanded to include shipboard recruiting.

Gibson’s promotion reflects a corporate culture of promoting from within. Michael Bayley, president and CEO of Royal Caribbean International, started as a purser onboard the company’s ships before rising through the ranks to head the cruise line that now has 26 ships and more than 77,000 employees.

In just two years, Gibson has helped to recruit more than 300 people to work in The Bahamas, along with another 100 for Labadee in Haiti and more than 1,000 to work on Royal Caribbean’s ships.

“I think that’s why I love being a recruiter, because of the fact that I’m able to help people find their dreams,” Gibson said. “Some people who don’t even know they’re good at certain things, I’m able to help them navigate through that by giving them the opportunity to work with us.”

Gibson recently traveled to Dominica and St. Vincent as part of Royal Caribbean’s recruiting efforts, and he was on the ground for the job fair in Nassau recently when Royal Caribbean made offers to dozens of people in the hopes of filling several different positions on Coco Cay.

The exercise was part of a larger regional hiring effort to attract more Bahamian and Caribbean talent for Royal Caribbean’s private destinations and its ships. Royal Caribbean’s Director of Talent Acquisition Cindy Williams, said the company is coming back “better than ever.”

“We have a strong employer brand, and we are committed to making our return to service better than ever by bringing new crew members to Royal Caribbean,” she said.

Gibson said the magnitude of the post-pandemic boom is evident in Coco Cay’s guest numbers.

Gibson said that goal is just a microcosm of the company itself, which maintains diversity and inclusion as key priorities.

“I have coworkers from all around the world,” he said.

Recalling Royal Caribbean’s swift response to Hurricane Dorian in 2019, Gibson said the company’s passion for its employees was a considerable factor in his decision to accept his first job with the cruise line.

“I chose Royal because of some of the things they have done,” he said. “When Hurricane Dorian hit those islands, Royal Caribbean were some of the first people on the ground. I wouldn’t even talk about the people who were employed by Royal Caribbean — they spent millions of dollars helping employees get back on their feet.”

And although Dorian made history as one of the most powerful Atlantic storms ever recorded, Royal Caribbean’s response — rushing in to provide food, water, shelter and medical supplies for those impacted — was not particularly unusual for the company.

“When I say this, I mean throughout any disaster,” Gibson said.

“In 2020, there was a typhoon in the Philippines,” he added. “We assisted so many of our team members with helping their families back home. And this happens all the time. Our company is always about putting its employees first.”