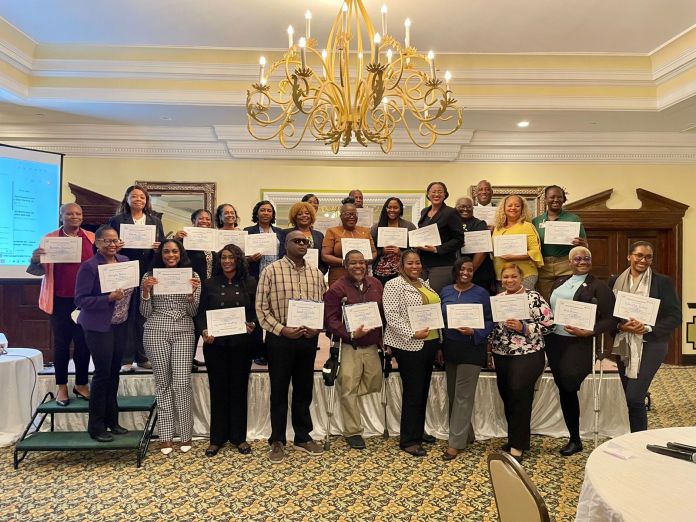 As the region continues to face the effects of complex global conflicts and humanitarian crises, governments need to reaffirm their commitments to international treaties that seek to achieve gender equality such as the Convention on the Elimination of All Forms of Discrimination against Women (CEDAW).

The workshop addressed to members of the Bahamian Government, Parliamentarians and Civil Society, sought to strengthen the understanding of how national reporting on the Conventions can be used to facilitate more effective advocacy, legislative and policy development, and accountability to promote human rights within the Bahamas.

Human Rights Officer in the Capacity building programme, UN Office of the High Commissioner for Human Rights, Marie Boyer said: “During the 3-day event, we managed to look at the expectations on the Bahamas to meet their obligations as they relate to women’s rights, the rights of persons with disabilities, children, and the right of racial minorities. A lot was achieved, and we were honoured with the great contribution from Ms. Marion Bethel, expert of the UN Committee on the Elimination of All Forms of Discriminations against Women.”

Ms Boyer further highlighted one of the main outcomes of the training: “At the end of the workshop, participants drew a concrete roadmap to finalize a number of reports that will be subject to review by UN Treaty bodies in Geneva in the months to come.”

In delivering closing remarks, Representative for UN Women Multi Country Office – Caribbean, Tonni Ann Brodber congratulated the participants for their commitments to advancing equality in the Bahamas while emphasizing the important role they played as champions for equitable policies in their national governments and regionally.

Ms Brodber said: “The Caribbean region is like no other— whether our diversity in culture, people, creativity and biodiversity, there is so much to celebrate about our people and our region. However, we acknowledge that progress is still needed in many areas, and we recognize that to better secure the human rights within the Caribbean, it is important for all Caribbean countries build their capacity to effectively meet global treaty bodies requirements, and a critical part of this is Reporting.”

The Bahamas Country Coordination Officer in the Office of the UN Resident Coordinator, Aneesah Abdullah identified the importance of the training for national development and role of the UN in amplifying human rights, stating: “One is the RCO’s commitment to responding to the particular needs of the government by collaborating with relevant government stakeholders in this case, the Department of Gender and Family Affairs and the Office of the Attorney-General. Another is the RCO’s role in promoting human rights – a key element of our organizational mandate. And finally, through facilitating the involvement of more than one agency, it demonstrates the RCO’s increased efforts to identify and create opportunities for the delivery of joint support, where appropriate, by the UN system to The Bahamas.”

Gender Expert, Department of Gender & Family Affairs in the Ministry of Social Services and Urban Development, Mrs. Elaine Sands, a participant lauded the organisers for the workshop: “I was so excited to be a part of such a timely forum as it helped to strengthen my knowledge on the reporting procedures and focused particularly on my area of work which is advocacy and awareness against Gender-Based Violence and to promote Non-Discrimination and Gender Equality. I received knowledge and understanding on the obligation of the state to respect, protect and fulfil the gaps in the Circle of Rights. Reviewing Gender Norms and Roles, Gender-Based Violence and how it affects the family and society.”

The Assistant Director of Legal Affairs, Office of the Attorney General and Ministry of Legal Affair, Ms Jewel Major shared similar sentiments, stating: “The presentations provided clarity and spurred the participates to want to know more. In gleaning some of the comments about the workshop from the participants, the common expression was that the information was presented with so much clarity, now I understand what we must do, and why we have to do what we are being encouraged to do.”

This training occurred several months after the inaugural National Gender-Based Violence (GBV)/Discriminatory Law Review Forum held in February 2022 which targeted gender and human rights experts in The Bahamas to examine the state of international commitments and national legislation which impact gender equality.