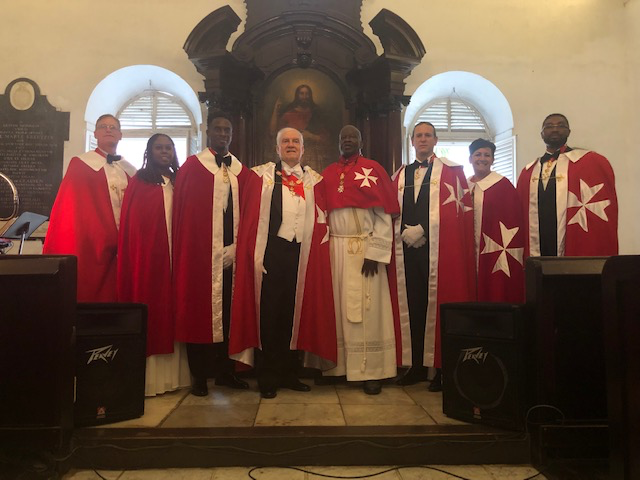 Three Bahamians were knighted as dames and chevaliers of the West Indies Commandery of the Order of St. John of Jerusalem, Knights Hospitaller, as it looks to attract young talent to its mission of aiding charitable causes across the region.

Natalie Bethel, Cordero Bonamy and Charles Sealy II joined Kimberley Causey-Gomez and Scot McChain, from St. Croix, and Thomas McOsker, from Puerto Rico, as the newest members of one of the oldest religious and chivalry orders in the world.

Membership in the Order of St. John of Jerusalem, Knights Hospitaller is by invitation only.

Sealy, entrepreneur and former Doctors Hospital CEO, is a well-known Rotarian, who has long been recognized for giving back to the community and understanding the value of contribution.

“I guess that’s what I’ve been all my life — understanding that we are part of an ecosystem that requires us to pull from it but also to provide to it so it can be sustained,” he said.

“So, I do believe in this thing called life where we have a duty and a responsibility to give back.”

Sealy said joining organizations like the Order of St. John of Jerusalem allows for more work to be done for the betterment of communities.

“I wanted to be able to work with an organization like this, and to bring the awareness to the community because many people are unaware of the huge boarder issue we have in our hospitals, or even the plight of so many persons who are dying only because they don’t have accessibility,” he said.

“And so, this is an organization that seeks to bring some support to those disadvantaged groups.”

And while Bethel and Bonamy are younger in their journeys with charity, Owen Bethel, the first Bahamian to become a member of the group, said the decision to invite them, in particular, was a part of the order’s effort to bring on promising young members.

“What we are attempting to do is to attract younger persons, because the average age of members is probably about 60 to 70 years old,” Bethel said.

“And we recognize that if we want the organization to be a going concern into the future, we need to attract younger individuals and through them, particularly those who have an interest in charitable work, to then carry on the legacy of the order and in their own way do their own charitable work through the Order.”

Bonamy, a physiotherapist, founded Pop Up Physios, a community organization that hosted clinics where they assessed athletes and educated them about their injuries and prepared carry-out lunches for underprivileged children in Nassau.

“I always believe in helping others in any way I can,” said Bonamy.

“I feel that’s what life is all about, my definition of success is how many people you’re able to bless in your lifetime.”

The Order of St. John of Jerusalem has supported various regional charities in recent years, aiding communities in the U.S. Virgin Islands, Haiti and The Bahamas.

The Bahamas Feeding Network and the Persis Rodgers Home for the Aged, both in Nassau, are among the beneficiaries of this year’s event, along with the Community First Home for the Homeless in the U.S. Virgin Islands.

In the past, the order has also donated to the Ranfurly Home for Children and to Hurricane Dorian relief efforts through the Rotary Club of Freeport.

The Order of St. John of Jerusalem was founded in 1099 with a goal of aiding the sick and the poor and developing methods to improve mortality and patient care. It has a presence in 12 countries around the world, where it provides support through various financial and material means to hospitals, clinics, orphanages, social service agencies, non-governmental organizations, and palliative care homes.

The newest members of the Commandery of the West Indies were knighted during an investiture ceremony held on April 30 at the Sabaoth Lutheran Church in Christiansted, St. Croix, U.S. Virgin Islands, where they pledged their commitment to the Order’s cause.

Chevalier Duncan Hurd, Herald of The Priory, who also served as master of ceremonies for the event, said the caliber of the new members and their commitment to the work of the order “augurs well” for the continuation of its work throughout the region.