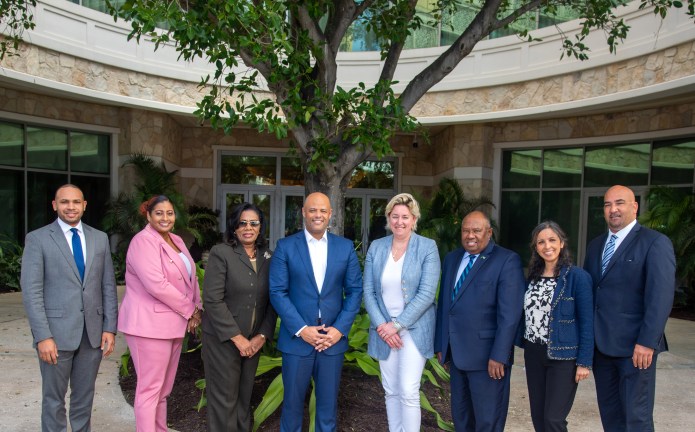 BTC officially welcomed its newly appointed government directors who will serve on the company’s Board of Directors. Valentine Grimes has been appointed Deputy Chairman. Daphne Simmons, Peter Cartwright and Parkco Deal have been appointed to serve as Directors on the nine-member board.

Commenting on the board appointments, BTC CEO, Andre Foster said: “We are happy to have Mr. Grimes as our Deputy Chairman, and we welcome him back as a member of our board. We are also pleased to welcome the other recently appointed board members to the team. We look forward to fostering a great working relationship and continuing to strengthen our alliance with the Government, as we work to further our fiber to the home rollout in an effort to revolutionize communications in every sector across the country. We’ve hit the ground running, and we’ve discussed our collective priorities. I am confident that we have the right people with the right expertise to lead the organization at this time.”

Grimes is a distinguished attorney and businessman. He is also a former banker and politician. Grimes served as the Progressive Liberal Party’s Member of Parliament for the Fort Charlotte constituency from July 1977 to 1992. He has previously served as chairman of BTC, and a number of government corporations including the Broadcasting Corporation of The Bahamas, Bahamasair Holdings Ltd, and the People’s Penny Savings Bank.

Daphne Simmons is a Human Resources Strategist with a wealth of experience in directing, coordinating and mentoring human resource development programmes within the public and private sector. Peter Cartwright is a seasoned accountant, auditor and financial analyst. Cartwright has held various leadership roles, most notably as Director of The Bahamas Investments and Securities Business Association, and Director of the One Bahamas Foundation. Parkco Deal is a noted attorney and Grand Bahama native.

He is also a former employee of BTC, having served as part of the technical team for over twenty years.

Inge Smidts, CEO of Cable & Wireless Communications serves as Chairman of the Board of Directors. Other Directors include Brendan Paddick, Julio Spiegel, Naji Khoury and Andre Foster. Nicole Watkins serves as Company Secretary. The Government board appointments was made effective, November 8th , 2021.