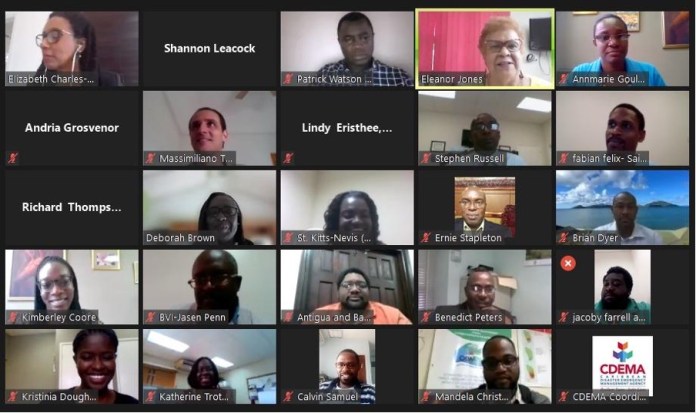 CDEMA recently met with its Participating States to present and discuss the updated Model National Recovery Framework (MNRF) under the UNDP Enabling Gender Responsive Recovery, Climate and Environment in the Caribbean (EnGenDer Project). The framework focuses on gender responsive recovery before a disaster and was well received by representatives from 15 of CDEMA’s 19 Participating States.

Project Manager of the UNDP EnGenDer project, Massimiliano Tozzi said, “This tool is a key piece in the EnGenDER efforts to support the construction of a more resilient Caribbean as it provides guidance to countries on how to plan and implement comprehensive and gender responsive recovery processes. While our Project focuses on 9 countries, the tools that are being
developed by CDEMA under EnGenDER will eventually be available for application to all participating states in the near future.”

Executive Director (ag) of CDEMA, Elizabeth Riley, told participants that since the surge of hazards from 2015, CDEMA embarked on its Comprehensive Disaster Management Strategy 2014-2024 to support the region’s capacity to Build Back Better and Bounce Forward. “The updated MNRF is a framework that draws on lessons learnt to strengthen governance and enhance disaster recovery resilience in Caribbean States. Another important aspect of the updated framework is the focus on gender responsiveness and greater attention to the inclusion of vulnerable groups, gender equality and human rights-based approaches to Disaster Reduction.” Riley explained.

The MNRF was first developed in 2015, as the Ministerial Council of CDEMA saw the need to offer guidance to Participating States, which allowed for a smooth transition from disaster response to disaster recovery. CDEMA now benefits from the UNDP administered EnGenDer Project, funded by Global Affairs Canada and the Foreign Commonwealth and Development Office (FCDO). One key element of the project is the MNRF, which addresses resilient disaster recovery in a proactive, integrated and gender responsive manner.

Of the 31 participants, 93% indicated willingness to develop National Recovery Frameworks based on the adaptation of the updated MNRF in their countries. Five EnGenDer Participating States will engage in country consultations to adapt the framework, and the process will culminate in a Regional Workshop in the last quarter of the year.