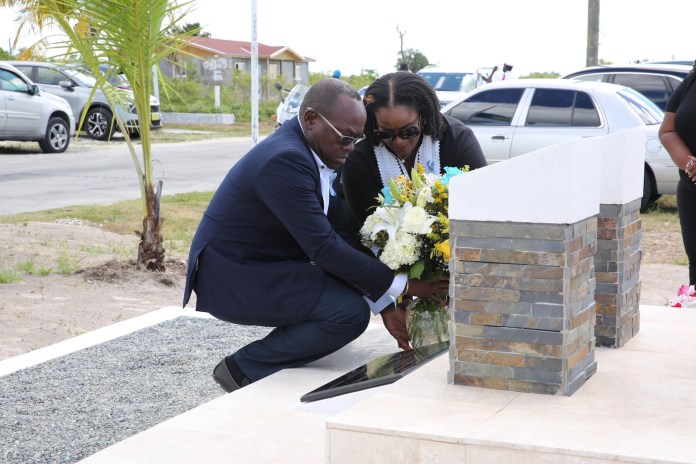 Deputy Prime Minister and Minister of Tourism, Investments and Aviation, the Hon. Chester Cooper headed a delegation of ministers, senators and parliamentarians who assembled at the four designated sites in East Grand Bahama on Saturday, September 3, 2022 to
pay homage to the victims of Hurricane Dorian and show their support to those still grieving.

With the national flag flown at half-mast, it was both a day of rejoicing and sadness for those who gathered for the wreath laying and memorial ceremonies on what was the third anniversary of the killer storm’s passage. The first ceremony took place at the Sir Jack Hayward Bridge where wreaths were laid by Deputy Prime Minister Cooper, Minister of Social Services and Urban Development the Hon. Obadiah Wilchcombe, Minister for Grand Bahama the Hon. Ginger Moxey, Member of Parliament for East Grand Bahama Kwasi Thompson, Grand Bahama Port Authority President Ian Rolle and members of the Forde family.

About an hour later, wreaths were laid at the Missile Base corner in Free Town where a beautifully crafted concrete-stone wall, in memory of those who were lost in that community, had been erected. Reverend Jacob Cooper, Jr., who served as moderator, recollected that fateful day three years ago that will forever be etched in his and the minds of others who decided to wait it out and faced the ferocious roaring Cat. 5 storm and its 20-foot surge and lived to tell the tale. Members of the Bridgewater and Carey families joined Deputy Prime Minister Cooper, Minister Wilchcombe and Minister Moxey in the laying of the wreaths.

“Today is a day of rejoicing, mixed with sadness,” he said, as he reminisced on the last time he and others in the community heard the voice of one of the victims who was advising radio commentators that the water level was already at 10 feet and rising. Following that ceremony, the entourage made their way down to McLean’s Town and congregated at the memorial site situated just opposite the New Emmanuel Baptist Church where a similar stone structure had been constructed.

It was a difficult time for the Thomas and Laing families who were gripped with grief as they looked on at the stone edifices, which now serve as a memorial to their lost loved ones. Pastor Freddie Lang, Jr., who knew the victims from that community personally, said it was a day filled with mixed emotions.

“We’ve lost our brothers, sisters and close relatives. It really hit home in every sense of the word. However, we rely on the power and the strength of the Almighty God to take us through,” he said. The final stop was at the Bayshore Town entrance in High Rock where the
lives of 17 people were lost. There, the beautiful memorial overlooked the scenic pristine blue, green serene waters, but still could not calm the world-wind of emotion that gripped the Pinder, Lightbourne, Cooper, Rolle and Munnings families taking part in the wreath-laying ceremony.

They were joined by DPM Cooper, Minister Wilchcombe, Minister Moxey, Minster of State in the Ministry of Social Services and Urban Development Lisa Rahming, Member of Parliament for East Grand Bahama, Kwasi Thompson and Chairman of the Disaster Reconstruction Authority Alex Storr.

Prayers went up at each site for the families and communities and for peace for the hearts and minds of those who lost loved ones in the monster storm, who are still grieving and thanking God for keeping them. (BIS Photos/Lisa Davis)