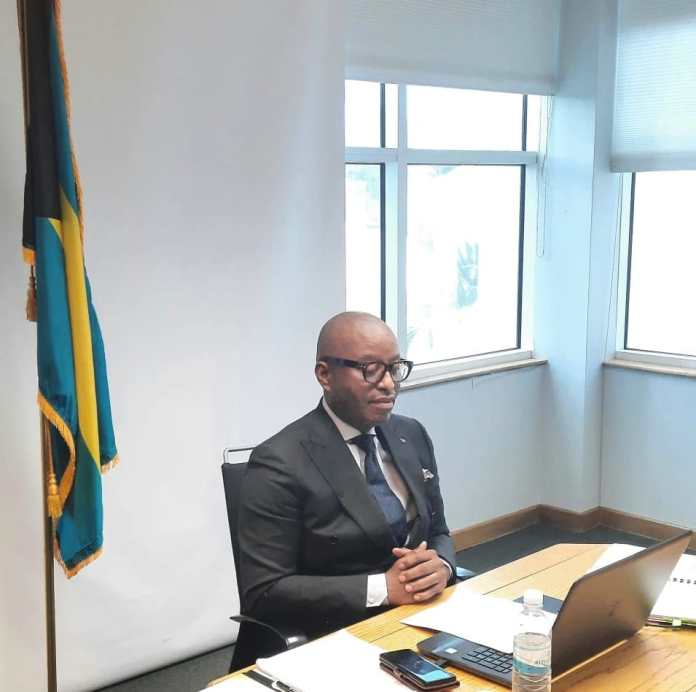 Minister of Foreign Affairs, the Honorable Darren A. Henfield, MP, led the Delegation of The Bahamas participating in the Seventh Summit of Heads of States and Government of the Caribbean Community and the Republic of Cuba, which was held virtually on 8 December 2020.

The Summit was co-chaired by Dr. the Honorable Ralph Gonsalves, Prime Minister of St. Vincent and the Grenadines, and His Excellency Miguel Diaz-Canel, President of the Republic of Cuba.

During the Summit, several issues of mutual importance to the Caribbean Community (CARICOM) and Cuba were discussed, including bilateral cooperation amidst the COVID-19 pandemic, trade and economic relations, disaster risk reduction, and climate change.

Minister Henfield spoke to the ongoing collaboration efforts between The Bahamas and Cuba in relation to agriculture, education, health, tourism, transportation and border security. He further elaborated on the continued solidarity and cooperation of both countries relative to The Bahamas-Cuba Basic Agreement on Economic and Technical Cooperation, signed and entered into force on 16 March 2009 and the Ministries of Education and Health Memoranda of Understanding (MOU’s) that have been formalized with Government of Cuba. He thanked the Government of Cuba for its sustained efforts in providing support to The Bahamas in the aftermath of Hurricane Dorian, and support within the region in the fight against the COVID-19 pandemic.

Minister Henfield concluded his remarks by assuring that The Bahamas remains firmly committed to South-South Cooperation. The Seventh Summit concluded with the adoption of a Joint Declaration which, inter alia, reiterated that regional unity and integration are based on absolute respect for the purposes and principles enshrined in the United Nations Charter and International Law.

The Declaration also reaffirmed the will to strengthen South-South Cooperation as an expression of solidarity for the promotion of bilateral and regional programs, as well as triangular cooperation for development regarding national priorities. It further highlighted the valuable human resource assistance rendered by Cuba in the fight against COVID-19.

The Declaration also expressed deep concern over the inclusion of certain CARICOM Member States on lists of non-cooperative tax jurisdictions and called for a change in this approach that negatively impacts the economies of Caribbean countries.

It also rejected the imposition of unilateral coercive measures and, in that context, called for an immediate and unconditional end of the economic, commercial and financial blockade against Cuba. Previous Summits were held in Havana in 2002, Bridgetown in 2005, Santiago de Cuba in 2008, Port of Spain in 2011, Havana in 2014, and Saint Mary’s in 2017.