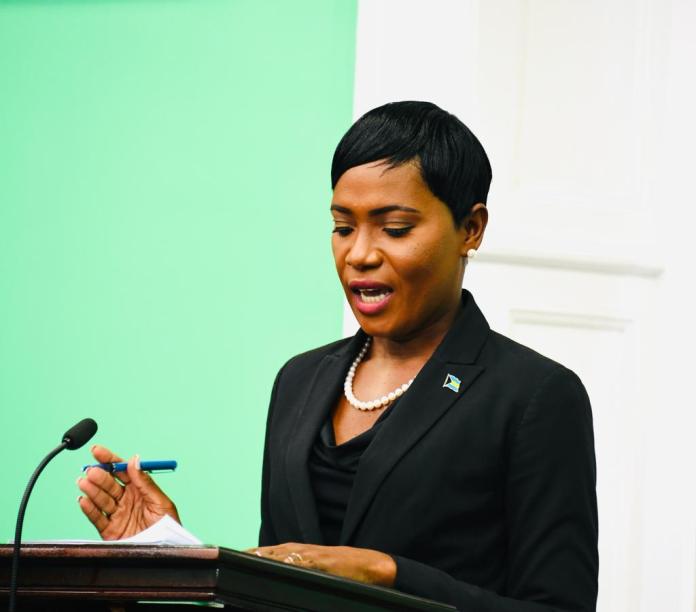 Describing the revitalization of Grand Bahama as not only crucial to its people, but essential to the country she added that because of the infrastructure, composition and location, the island has unlimited potential in industry and tourism.

“I’ve said time and time again that we have to partner for development, we have to work together to make things happen! No longer can we work in silos and expect to get things done!

“We are not in competition! We should be working together!!! This is why Collab: Partnerships for Development, a new unit within the Ministry for Grand Bahama was created.”

As the Prime Minister has assigned various mandates to the Ministry for Grand Bahama, said Minister Moxey, Collab: Partnerships for Development has been established and will work with all sectors of society to meet the needs of the people and development the community. As the Ministry for Grand Bahama has been charged with the revitalization and promotion of the island, promotional material will be developed to promote the entire island to show that the belief of nothing to do in Grand Bahama is wrong.

She added, “In recent meetings with cruise line executives, the Deputy Prime Minister who also serves as Minister of Tourism, Investments and Aviation and I, encouraged additional cruise calls to Grand Bahama Island because, in the interim, while ports are being built, the product needs to be reinvigorated. Also, although there will be many amazing opportunities for Bahamian entrepreneurs within the cruise ports, we highly encourage Community-Based Tourism and ‘real support’ in readying our people to be able to take advantage of the many opportunities ahead.”

The Minister referenced her contribution in the House of Assembly on Wednesday, where she announced a $5,000 grant programme focused on creative entrepreneurs and tourism enhancement.

The $5,000 is a start! What we believe is that this can be the beginning of an eco- system – a connector – per se, for tourism product delivery on Grand Bahama Island.”

She added that all that is asked is the products are authentically Bahamian and not from somewhere else. Seeing the island as the gateway to the Caribbean, the Minister said she sees Grand Bahama as the future Events and Entertainment destination of the country and with its proximity to South Florida, this will be used to bring exciting events to the island and as such, take “advantage of this untapped opportunity.”

The Grand Bahama International Airport is something that needs to be repaired, and she said GBIA is a top priority of the government. While the Deputy Prime Minister and Minister of Tourism and Aviation, the Hon. I. Chester Cooper announced plans for the airport, in the meantime minister Moxey said that while that is waiting to happen, things are being done to keep the airport functioning. The vision for Grand Bahama is that of Home of Maritime and Logistics, Home of Entertainment and Home of Innovation.

Minister Moxey also announced the groundbreaking ceremony for Carnival Cruise Port, Grand Port, is scheduled for May, 2022 with the project expecting to take two- and one-half years to complete.

The Minister closed by stating in working together they will cause “Grand Bahama to soar to heights never seen, with sustained economic growth and development!”