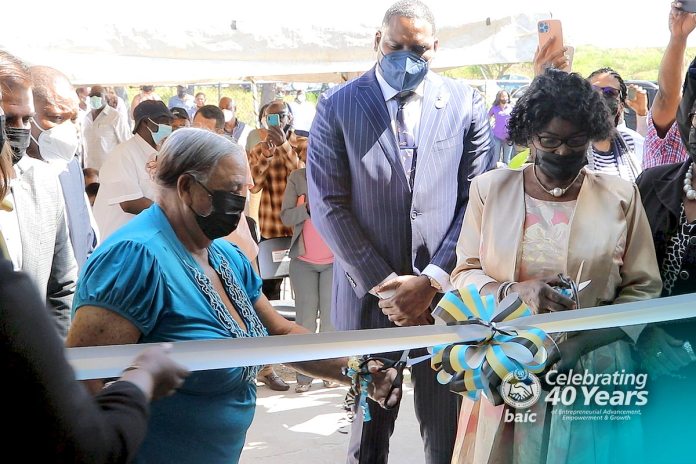 Farmers on the island of Eleuthera have made a commitment to work along with the Ministry of Agriculture Marine Resources and Family Island Affairs towards the achievement of food security in then Bahamas. In keeping with the Government’s Blue Print for Change to make food sustainability a priority in the country, the Minister of Agriculture Marine Resources and Family Island Affairs the Hon. Clay Sweeting officially re-opened the Hatchet Bay Packing House on Friday, February 18. Participating in the ribbon cutting ceremony along with Minister Sweeting was his wife Mrs. Sweeting, Parliamentary Secretary in the Ministry of Agriculture Mr. Leonardo Lightbourne, Permanent Secretary in the Ministry of Agriculture Mrs. Phedra Rahming-Turnquest, Diana “Lady Di” Thompson, Mrs. Lena Johnson, a retired employee of the Bahamas Agricultural and Industrial Corporation, Executive Chairman of BAIC Mr. Leroy Major, Executive Chairman of the Bahamas Agriculture Marine Science Institute (BAMSI) Senator Tyrell Young and General Manager of BAIC Mr. Troy Sampson.

The minister said Hatchet Bay was the first stop on a country-wide mission to encourage farmers in particular and Bahamians generally to cultivate the habit of helping to grow what we eat.

The Packing House which was closed for several years is now open to accept fruits and vegetables from registered farmers in Eleuthera which will be sold at the Produce Exchange in New Providence. The minister also announced that a building for a food processing plant and a fish and farm store will be constructed on the grounds of the Packing House in Hatchet Bay.

The Minister of Agriculture along with officials of BAIC and BAMSI also conducted a meeting with farmers and tenants of BAIC at St. Mark’s Methodist Church in Hatchet Bay on Thursday, February 17. Farmers and BAIC tenants got an opportunity to voice their concerns and to interact with the minister and his panel to get answers to their many questions concerning the Government’s plans for the island of Eleuthera.

The Executive Chairman of BAIC Mr. Major along with a team from the Corporation toured several farms and businesses in the Hatchet Bay Industrial Park on Friday afternoon.

The Minister is leading a delegation from various departments in the Ministry of Agriculture Marine Resources and Family Island Affairs to Dubai, United Arab Emirates to attend the first-ever Food for Future Summit and Expo, hosted in conjunction with the United Nations Food and Agriculture Organization (FAO) as a p part of Food, Agriculture and Livelihoods week at the World Expo 2020. The conference is being held February 23-24. Among the delegation are representatives from Bahamas Agricultural Health and Food Safety Authority (BAHFSA), Bahamas Agricultural and Marine Science Institute (BAMSI), Bahamas Agricultural and Industrial Corporation (BAIC) and the Department of Agriculture and Marine Resources. Mr. Sweeting said this expo presents an opportunity to gain knowledge, to interact and explore the possibilities of working closely with other government to aid in our fight for food security. The event is expected to be attended by over 100 countries that have a focus on food security.

The minister is expected to give a presentation and participate in a food security panel discussion.