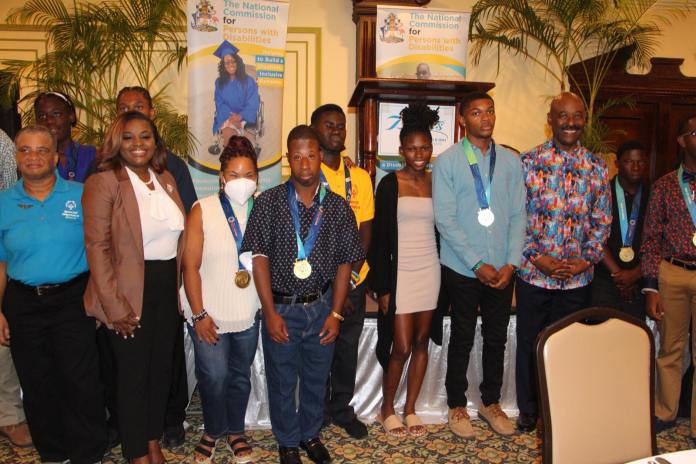 Friday, 24th June 2022 the Ministry of Social Services and Urban Development’s National Commission for Persons with Disabilities hosted a reception for returning Special Olympics Medalists and Athletes who competed at the 2022 Special Olympics USA Games in Orlando, Florida. At the games more than 5,500 athletes and coaches from all 50 States and the Caribbean gathered in competition in front of a spectator audience of 125,000 people.

The reception in celebration of the 2022 Special Olympics Team was held at Superclubs Breezes (Nassau). The event, attended by the Special Olympics’ Athletes, Coaches, Family and Friends, Government Officials, NGO’s and Supporters. The highlight of the evening for the team was a surprise visit by Two-time Olympic Gold Medalist Shaunae Miller-Uibo. Miller-Uibo made tribute to the achievements of the Special Olympians and took photos with them prior to her appearance at The Bahamas Nationals Track and Field events.

“It is indeed an honor for me to be amongst our Special Olympians and to show them my love and recognition for their achievements,” said Miller-Uibo. “They have achieved world-renown recognition for their performances in the same way that all Olympians do for our country,” said Miller-Uibo. Special Olympics ‘Team Bahamas’ won individual medals, two team medals, and six other medals: four gold and two bronze.

The official Medal count breakdown for the 2022 Special Olympics Team is as follows: –

Mr. Gilbert Williams, National Director of Special Olympics said the “Soccer Team (mostly Grand Bahama Delegates): win/loss record 2-2. The Team played earlier in the day and defeated the Special Olympics from Ohio 4-3, giving them the Gold Medal in their division.”

Williams said “This recognition of our Athletes’ achievements is a long time in coming! It only marks the beginning of greater things to come in the spirit of equality and inclusion of Persons with Disabilities.” The National Director said “It is hoped that The Bahamas will soon be the host country of several Regional, Special Olympics competitions.”

In attendance at the reception honoring and celebrating the performances of The Bahamas 2022 Special Olympics Team was: The Hon. Obediah Wilchcombe, Minister of Social Services and Urban Development, who also represented the Rt. Hon. Prime Minister Brave Davis, The Hon. Glenys Hanna-Martin, Minister of Education and Technology, The Hon. Jobeth Coleby-Davis, Minister of Housing and Transport, and Senator Kirk Russell from Grand Bahama.

“I am so very proud of our Special Olympics Athletes and Coaches and I congratulate each and every one of them,” stated Minister Wilchcombe. “It is their hard work, perseverance, dedication and love of the sport that has led them to become international champions, and this is a proud day for us all in The Bahamas, as we celebrate their victory.” Minister Wilchcombe said “I want to especially thank Mrs. Shaunae Miller-Uibo, who should be commended for taking the time to celebrate with us this evening and show the Special Olympians that they are included as part of the Bahamian Athletic Community.”

Beefing Up Security At Government Schools