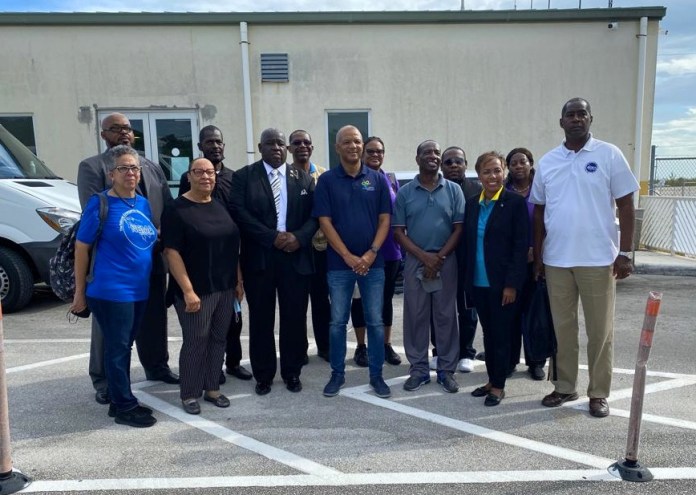 “Minister Obie Wilchcombe would have already submitted his report and assessment, advising the government on the damages and repairs that are needed. That report is under Cabinet consideration. NEMA is here to give any individual assistance that could be provided.” Minister LaRoda said that there is an immediate need to get the hurricane shelter at the Eight Mile Rock gym properly fixed, because it is the largest
shelter on the island. The visit came on the heels of the recent passing of the potential tropical cyclone over Grand Bahama on Saturday, June 4, 2022, which left many of the communities in West Grand Bahama flooded.

Minister LaRoda acknowledged that although the system had never reached tropical storm nor hurricane strength, but because it brought heavy rains which resulted in major flooding mainly in West Grand Bahama, it allowed NEMA and government officials to get a better idea of some of the things that must be done to mitigate future flooding problems, even as the country prepares for this hurricane season, which has already started.

Captain Steven Russell, Director of NEMA said that it was his observation that because the areas in West Grand Bahama were inherently low-lying, it leaves them vulnerable to serious flooding from any heavy rainfall or storm surge. He said the hurricane shelter at the Eight Mile Rock High School gym, is adequate, adding that there are some issues that must be attended to in order to move the facility from adequate to best.

“West Grand Bahama is almost considered the storm capital of the region and so any major storm that comes, you can anticipate storm surge coming across the western waters, because of the shallow banks to the north of it,” said Captain Russell.

“So, the evacuation plans, proper sheltering and proper drainage are all important components for all the residents in Grand Bahama.”