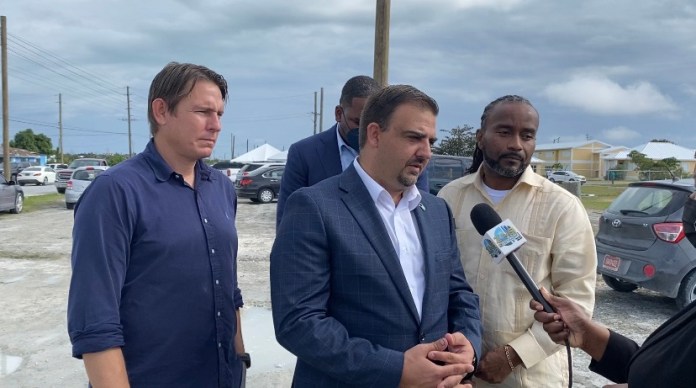 A number of Cabinet Ministers voted in the recent Local Government elections to support the democratic process throughout the Family Islands.

Minister of Agriculture, Marine Resources and Family Island Affairs Hon. Clay Sweeting with responsibility for Local Government along with Parliamentary Secretary Leonardo Lightbourne made their rounds on Thursday, January 27 to observe the Local Government voting process, visiting several polling stations on the islands of Eleuthera, Abaco and Grand Bahama.

“Once you listen to the people, you will get a better system and people will want to be more involved,” said Gibson. Minister Sweeting then headed into North Eleuthera, where he would cast his vote in Spanish Wells, being the first Local Government minister to vote in a local government election.

On the ground, Sweeting said, “People are excited and coming out to vote.” In Abaco, Sweeting was greeted by Central and South Abaco MP, John Pinder II, as well as North Abaco MP Kirk Cornish. Both MPs said the cohesive statement from Abaconians is a need for more housing developments and restoration on the island post Hurricane Dorian – an initiative they hope can be facilitated through partnerships with local
government officials. Sweeting said, “There’s a lot of excitement in Abaco.

There’s a lot of campaigning on the ground and the candidates are out in full force and excited about what they can do in their communities.” Minister for Grand Bahama Ginger Moxey greeted Sweeting as he landed on the island.

She voted at the Freeport Gospel Primary School. According to Minister Moxey, Grand Bahamians “want a local government who works along with government to make things happen. There are a lot of things in the community that those who are always present in the community
are able to do, and they are excited about the candidates that presented themselves, and believe they will assist the government in making things happen,” she said.

At the end of his visit, Minister Sweeting said, “It was exciting to move around and to see people campaigning and the movement on the ground. Unfortunately, it seems as though the voter turnout was low, lower than normal but one silver lining is that in the polls, I’ve seen a lot of young people and first time poll workers. It is extremely exciting to see that these young people are getting involved in the process in one way or another.”