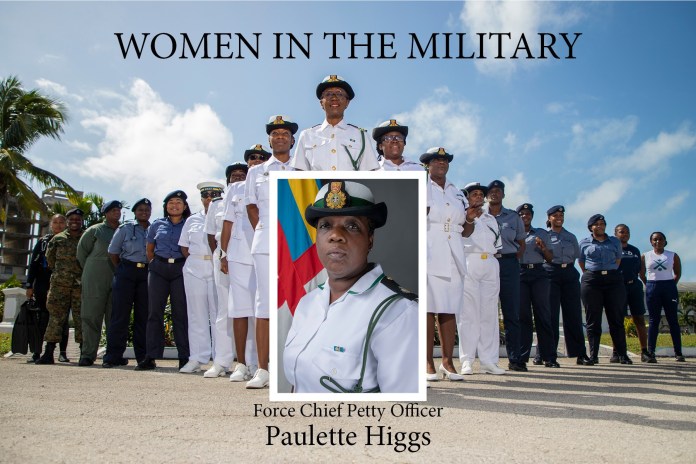 Force Chief Petty Officer (FCPO) Paulette Higgs is a career and family-orientated person. She learned over the years to balance work and family life as a military mother. Like no other, Higgs has no time to waste. She’s task-orientated and even her children know the basic drill whenever there’s bad weather lurking. Knowing the weather was an important aspect of her children’s lives. She recalls walking into their room after arriving from work with all their bags packed ready to shift and lift after listening to the weather report.

A serious individual, some would call her quiet. However, in describing herself, she says. “I am a resilient person that has overcome many challenges in my life, and today as a military mother I’m still standing strong. Whatever life offers me, I am willing to take it on knowing that I am an overcomer and that other women stand strong with me. I say to my sisters (women everywhere), hold your heads up high, continue to develop and excel in the workplace, build strong families, strong bonds and keep God at the center of your life. With this, we stand united as women and as nurturing wings that carry the future of our country.”

As she recants what stood out about her upbringing, Higgs gives a basic summary. The Higgs’ family ran a strict home. Back in those days, children or young adults often did what their parents told them. “I was not motivated to join the Defence Force, but my mother told me to go downtown and get an application. I was excited to leave home unsupervised. I got the application not knowing it was for me. My mother saw an advertisement in the local newspaper stating that The Defence Force was accepting the first group of female recruits. However, my Dad disagreed with me joining the force, so when the call came, my dad answered the phone and said it was a No-No. When the second squad of females was about to be enlisted, my Mom answered the phone and the rest was history. I became not only a member of Woman Entry Two (2), but was also Best Recruit.”

A thirty-three-year veteran, Higgs had the opportunity to receive numerous awards for her service of dedication and excellence, including receiving the Long Service Award for completing thirty-years of service, Commander Defence Force Commendation, and Warrant Officer Commission. Throughout her career, she was afforded the honor of serving in areas such as the Training Dept, Supply Department and the Squadron Department in which she served onboard HMBS NASSAU and HMBS ROLLY GRAY. FCPO Higgs is presently serving in the Headquarters Department subsection Disaster Management Unit.

A single mother of three (3) children; 1 boy and 2 girls, Aursland Seymour 27, Adeynnah Seymour 24, and Anazah Seymour 21, she can be found on a regular Sunday morning at The Salvation Army Church, Grants Town teaching her Sunday School Class.
The role model in her life is her aunt, Maudlene “Pam” Newbold, her mom’s sister. “I admire Auntie’s strength as an independent woman. I had the privilege as a child and now as an adult to see how she has built her life over the years. Most importantly, she accepts life as it is, that is, not allowing the challenges of life to overwhelm her. Whatever she may face in life, her approach is to deal with the situation one step at a time. Another reason she is a role model is because of her resourcefulness. She makes what she has, work for her. Her resilient spirit is a source of strength and encouragement. My most valued lesson, I’ve learned from Aunt Pam is to look at what’s in my hand and use it to help others.”

Higgs describes herself as a superhero to her kids. I am a super-mom who with the help of God, will move heaven and earth to make things happen for my children. “My children have faith in God and believe that I can do anything. They would often tell their friends, ‘my mom, she’ll know what to do.’ Being a military mother, my children expect me to help others and solve problems.”
Higgs recounts her experience in the Royal Bahamas Defence Force and states the key moments that stand out the most.

The highlight of her career was the ability to mesh her love for mentorship and the various functions that she has served thus far.

The Training Department allowed her to mentor many entries within the Force. As her career advanced, she had the privilege to work with the youth of the nation in the RBDF Annual Summer Camp Program which has been a highlight of her career, because it allowed her to impact the nation’s youth. Another highlight of her career would have been serving on Her Majesty Bahamian Ships. She had the honor to serve onboard both HMBS NASSAU and HMBS ROLLY GRAY, which were most memorable experiences for her. Whilst onboard HMBS NASSAU, her main function was Navigating Yeoman. This role allowed her to interact with all action stations onboard the vessel. She had to be aware of what the vessel was engaged in at all times. This role made her feel resourceful and powerful as a woman. Similarly, this is what mothers do each day for their families, however, on much a larger scale at work.

Another highlight while working on the Defence Force for Higgs was being a part of the establishment of a Brokerage Section of The Supply Department, thus defraying the cost of having to hire an agent to carry out such services. This military mom keeps the balance by separating work, family, and her home life.

She says, “When to work, am to work and I do my work well, that’s my contribution. When I go home, I am engaged with my family.” Balancing work and family is not an easy task for military mothers who often have to be called away sometimes at a short turnaround period. Therefore, as military mothers, it will require a village to help raise productive children. It is our responsibility to help guard our heritage in terms of our children and legacy, as well as guarding the territorial waters of our country.

Also, as mothers, we must be careful of the type of village that we leave our children in. As parents, we are to ensure that the village is a village of trusted and honest individuals that will lookout for the best interest of the children who are willing to love and
accept your children. This too is an important aspect of functioning at work while away from home. Another aspect of balancing work, family, and home is to get your extended family involved as much as possible. Being a military mom is also taxing on family, who often have to stand in the gap for you on short notice when you have to leave. When at home you must put time into your
children, this will require a planning regiment in which the emotional, social, and psychological needs of both child and parent are restored without interrupting quality time spent together.

Get involved in what the children are doing. Do this in such a way that they think you are over caring for them because there are going to be times when you can’t be there. The love and duty of a Mother is unending and most rewarding, Being a Military Mother is a duty rendered with dignity honor and pride.