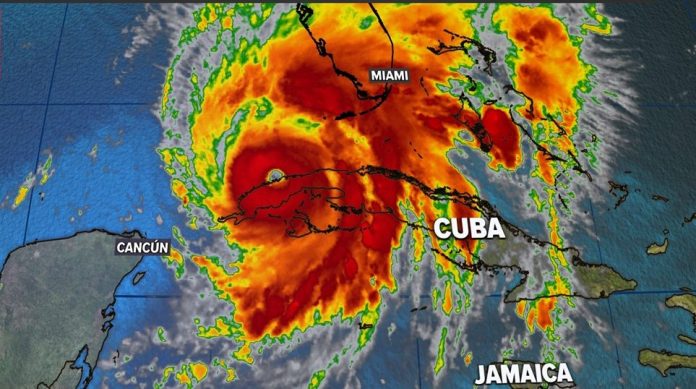 Director of the National Emergency Management Agency (NEMA), Captain Stephen Russell, Tuesday advised residents across the north-western Bahamas to continue to maintain caution and vigilance over the next several days in regards to Hurricane Ian which strengthened into a Major Hurricane (Category III or higher) Monday night/Tuesday morning. Rainbands from Hurricane Ian will continue to affect the northwest Bahamas through Friday.

Because of its expansive nature, and the fact that the islands are located on the strongest side of the storm, outer rainbands from Hurricane Ian will continue to bring heavy rains, severe thunderstorms with dangerous lightning, gusty winds and possible tornadic activity to the northwest Bahamas, particularly the islands of Bimini, Grand Bahama, Abaco, the Berry Islands and Andros. Total rainfall amounts of 4 to 6 inches are expected with isolated amounts of up to 8 inches through Friday. Residents of low-lying, flood-prone areas of the north-western Bahamas, are asked to take special precautions during any heavy and/or prolonged rainfall event. This includes the need to be cautious when driving in flooded areas. Residents are also being advised to remain indoors during thunderstorm/lightning activities. If outdoors during these periods, residents are advised to seek shelter indoors.

Boaters in the northwest Bahamas should also remain vigilant due to the threat of possible waterspout activity, and winds forecast to reach gale force – 20-38knots. The National Emergency Management Agency, in collaboration with The Bahamas Department of Meteorology, is also monitoring an area of Low Pressure located several hundred miles off the Cabo Verde Islands (also known as the Cape Verde Islands) that has a high chance (70 per cent) for Tropical Cyclone formation over the next five days.

Residents are being asked to pay close attention to all of the NEWS ITEMS, Public Forecasts, Severe Weather Warnings and/or Special Weather Statements issued by The Bahamas Department of Meteorology.