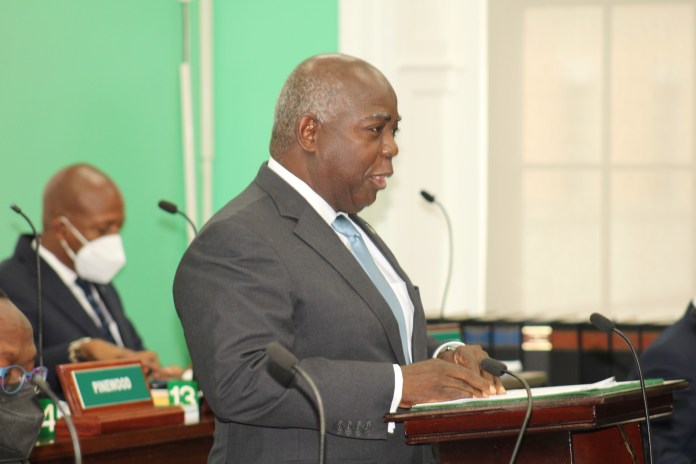 NASSAU, The Bahamas – During his tribute to Bahamian icon the late Sir Sidney Poitier, on January 12, 2022, in the House of Assembly, Prime Minister and Minister of Finance the Hon. Philip Davis said that, as Bahamians mourn its nation’s loss, they marvel at how far Sir Sidney traveled, and the courage it must have required.

“When he was a teenager in New York, far from family and home, washing dishes, looking for opportunities, struggling to survive, and cold – and we all know how cold a New York winter can feel for Bahamians – he had the courage to dream of a much different future for himself,” Prime Minister Davis said.

“Think of the imagination that must have required — he could not have had any role models for what he wanted to achieve, for that’s
what it means to be the first.”

He also spoke on the firsts that Sir Sidney achieved during his life.

“And then there’s the one I can’t stop thinking about — when he insisted in 1969 that the crew for one of his films be at least 50 percent black, that was a first, too,” he added.

“When he opened doors to opportunity, he made sure those doors opened for others, too.”

Prime Minister said that Sir Sidney was one of the world’s biggest movie stars – and he had the Hollywood Walk of Fame star and the Oscars and Golden Globes to prove it.

“His determination not to accept parts based on negative stereotypes had an impact on millions of moviegoers, black and white,” Prime Minister Davis said.

He also gave examples through the roles that Sir Sidney portrayed in his best-known movies. Prime Minister Davis said: “In ‘A Patch of Blue,’ Sir Sidney’s character Gordon befriends a young blind woman, who does not know, at first, that she is falling in love with a black man; it was his strength and his character that were visible to her.

“In ‘The Defiant Ones,’ two inmates, one black and the other a white racist, escape a chain-gang, shackled to each other. The two men begin as enemies, but then, first out of necessity, but later out of genuine recognition of the other’s humanity, become allies. When Sir Sidney’s character makes it safely on to a train, he does not leave Tony Curtis’s character behind. It was a film that was progressive for its time, a film about humanity triumphing over bigotry.”

He added: “’In the Heat of the Night,’ Sir Sidney played Virgil Tibbs, a Philadelphia homicide detective. His character is slapped by a plantation owner whom he’s investigating. Even though it wasn’t in the script, Sir Sidney insisted his character slap him right back. They called it ‘the slap heard round the world.’”

Sir Sidney’s impact extended far beyond the choices he made in the film business, Prime Minister Davis noted.

“As the current president of the National Urban League said, ‘He was one of the first that spoke out for racial justice at a time when it was risky’,” Prime Minister Davis said.

He pointed out that Sir Sidney also he cared deeply about Majority Rule and Independence in The Bahamas.

“And of course, he participated in the civil rights movement in the United States, supporting the Southern Christian Leadership Conference, and going with his friend and fellow entertainer Harry Belafonte to Mississippi to deliver a much-needed cash infusion to Freedom Summer civil rights activists in 1964,” Prime Minister Davis added.

“Their fame did not protect them from danger; they were chased and harassed by armed Klansman.”
He noted: “What an extraordinary life Sir Sidney had – he played icons and legends on the screen, from US Supreme Court Justice Thurgood Marshall to South Africa’s Nelson Mandela, and off-screen he was honored and praised by no less than Dr. Martin Luther King, who called him ‘a man of great depth, a man of great social concern’ who was ‘dedicated to human rights and freedom’.”

Prime Minister also reiterated how Sir Sidney projected Bahamian exceptionalism on the international stage. Prime Minister Davis stated that he was grateful for an opportunity he had, in 2012, as then Deputy Prime Minister, to speak at a dinner honouring Sir Sidney in Los Angeles, and to thank him for all that he had done for arts and culture, and civil rights, and The Bahamas.

“In 2015, a Bahamian delegation returning from Asia had the opportunity to stop in Los Angeles to visit Sir Sidney,” he added. “When asked what he would say to young Bahamians, I am reminded that he responded: ‘All I can say to them is wherever they go, whatever they do, they must remember that they come from one of the greatest countries in the world’.”

Prime Minister Davis said that it is always important to honour the legacies of exceptional Bahamian sons and daughters, for this was how citizens deepen their culture and strengthen their national identity. He noted that Sir Sidney overcame incredible odds to attain global acclaim, and in the process, he inspired the affection and respect of millions. But before the lights of Hollywood, before the honours and accolades, before the praise of Presidents, there was Cat Island, Prime Minister Davis added.

He said: “In a book he called his spiritual autobiography, ‘The Measure of a Man,’ Sir Sidney said it was his childhood on Cat Island that gave him his values, his sense of right and wrong. ‘In the kind of place where I grew up,’ he wrote, ‘what’s coming at you is the sound of the sea and the smell of the wind and momma’s voice and the voice of your dad and the craziness of your brothers and sisters…and that’s it.’”

Prime Minister listed a few of the facets of Sir Sidney that should be noted: “A Cat Islander. A Bahamian. An actor, a director, a writer, a producer. An activist, a diplomat, and a philanthropist. A history-maker. A barrier- breaker.

“Go with God, Sir Sidney,” Prime Minister Davis said. “You were a good and faithful servant. May the martyrs meet you at the gates and escort you to the Holy City, Jerusalem.

“On behalf of my wife, Ann Marie, my Cabinet and Parliamentary colleagues and the government and people of The Bahamas, I extend heartfelt condolences to Sir Sidney’s widow, Joanna Shimkus-Poitier, his children and his extended family in the entertainment industry.