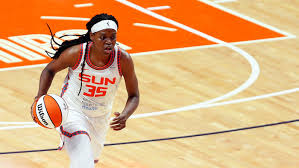 Source: Office of the Prime Minster

Prime Minister, the Hon. Philip Davis extends heartfelt congratulations to Bahamian Jonquel Jones on being named the 2021 Women’s National Basketball Association (WNBA) MVP. Jones who plays with the Connecticut Sun, hails from Holmes Rock, Grand Bahama.
The Prime Minister wishes to highlight Jones’ efforts and professional commitment, which are being recognized by this award. She is the first Bahamian born professional basketball player to gain such recognition. Jones received 48 of 49 first place votes to win the 2021 MVP.

Prime Minister Davis said, “Ms. Jones’ amazing accomplishment will become the standard against which many will be measured not just here in The Bahamas, but around the world. Without a doubt, she is now the epitome of excellence in the arena of women’s basketball.”
Jones has received several awards in her stellar career, including the 2018 WNBA Sixth Player of the Year Award, the league’s Most Improved Player in 2017 and the 2015 Atlantic 10 Player of the Year. The forward led the Connecticut Sun to a 26-6 win-loss record for the season.

For the third time in her career (2017, 2019 and 2021) she finished the season as the league’s rebounding champion, averaging 11.2 rebounds per game. Jonquel Jones is truly an ambassador for The Bahamas.