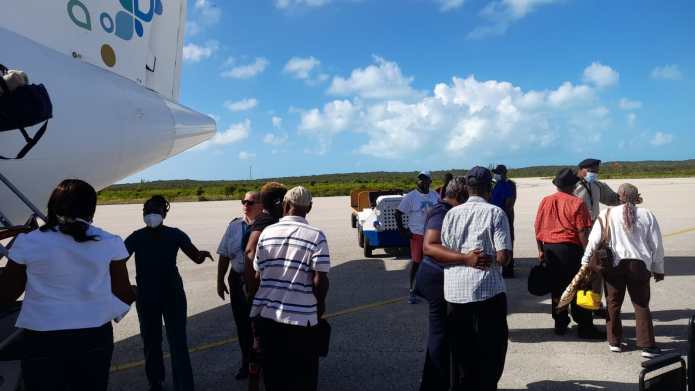 Ten Senior Citizens were evacuated from Mayaguana to Exuma early Tuesday morning (September 20) as a precautionary measure ahead
of expected Tropical Storm conditions associated with Hurricane Fiona. Residents in the southeast Bahamas, particularly those on Inagua and Mayaguana, were forecast by The Bahamas Department of Meteorology to experience minimal Tropical Storm Conditions through the day Tuesday. This was anticipated to include gusty winds, heavy rains and localized flooding.

The group was received at the George Town Airport by Administrator Ms. Cristian Palacious and her team, and subsequently transported to accommodations that had been pre-arranged.

A Tropical Storm Warning remains in effect for the islands of the Southeast Bahamas, including Inagua, Mayaguana, Acklins, Crooked Island, Samana Cay, Long Cay and Ragged Island as a result of the passage of Hurricane Fiona. A Tropical Storm Warning means that Tropical Storm conditions could be experienced in the mentioned Islands within 36 hours. Fiona is moving towards the north-northwest at nine mph. This general motion is expected to continue through today, followed by a turn toward the north tonight or Wednesday (September 21). On the forecast track, the centre of Fiona will continue to move near the eastern portion of the Turks and Caicos Islands during the next few hours; away from those islands by tomorrow, and approach Bermuda by late Thursday.