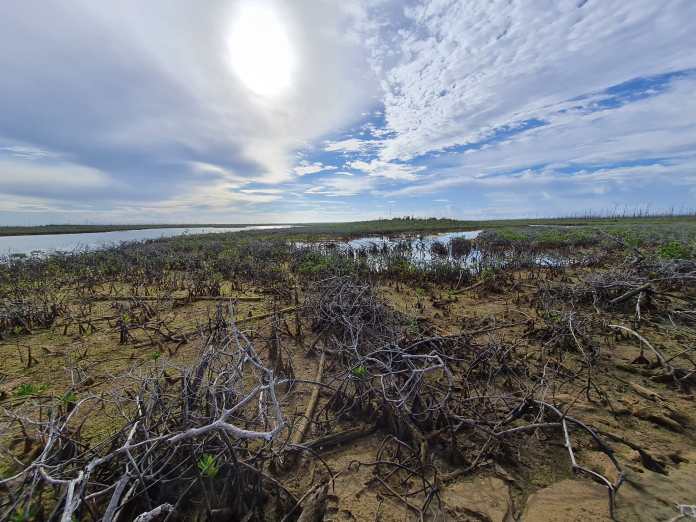 In the pinelands and mangroves that make East Grand Bahama so distinctly unique, nature is replenishing itself from the massive destruction of Hurricane Dorian. The restoration slowly taking shape is evidence that the death and devastation that the massive storm left behind is giving way to new life, according to biodiversity experts and scientists who recently conducted field assessments.

The biodiversity consultants with the Implementing Land, Water and Ecosystems Management (IWEco) in The Bahamas project have concluded a new phase of field surveys in East Grand Bahama. The team assessed pinelands and wetlands, collecting detailed information on the habitats and the life forms they support for a biodiversity inventory that will be published as part of the project.

“We have yet to see a standing pine tree that remains alive. In different types of pine habitats, however, you’re seeing different rates of recovery, with seedlings beginning to be established and these seedlings are typically anywhere from eight to 12 inches tall, and some we’ve seen are two to three feet tall,” Mark Daniels, biodiversity consultant with BRON Ltd. said.

The biodiversity team spent more than a week conducting point counts, walking transects and vegetation plots to better understand the recovery process of pine and wetland areas in East Grand Bahama since Hurricane Dorian in 2019.

“The external fringes of those mangrove systems remain dead. However, in the more protected interior regions of these mangrove patches you are seeing mangroves returning and those creek systems where you have mangrove habitats that are inland and protected from the full force of the sea, are also recovering and looking very healthy,” Daniels said.

The biodiversity team also saw several species of wetland and forest birds as well as endemics like the Bahama Yellowthroat and Bahama Woodstar as well as pine saplings that are growing in areas where the trees were dead. Information on the wildlife in East Grand Bahama will also be included in the biodiversity inventory that will be made public.

“We are seeing a lot more birds in the area but most of them are winter migrants from North America coming to The Bahamas and their presence increases our avian fauna by over 50 per cent,” said Scott Johnson, biodiversity consultant with BRON Ltd. “What’s also interesting is that some of the highest diversity of birds we are seeing is in patches of coppice areas in East Grand Bahama. These birds are occupying sites that have a variety of plant species that are producing flowers and some fruits so they have food resources.”

Although the Bahama Yellowthroat and Bahama Woodstar have been observed in the area, other pineland species of birds have not been seen since Hurricane Dorian in 2019, he added.

“I fear that they may have been extirpated from the East Grand Bahama area. Until that pineland ecosystem comes back which may allow for new immigration of birds in that area, chances are that we may not see Bahama Warblers, Olive-Capped Warblers, or Cuban Emeralds in that area for a while,” Johnson said.

The IWEco The Bahamas project is part of a larger, regional undertaking for the Caribbean funded by the Global Environment Facility (GEF) and implemented by the United Nations Environment Programme (UNEP). For The Bahamas, the Department of Environmental Planning and Protection (DEPP), the Forestry Unit, the Ministry of Public Works and Bonefish & Tarpon Trust are the leading partners.

The work that is being done towards creating a biodiversity inventory is pivotal as it will not only benefit the natural environment but involve citizens more closely in sustaining it. East Grand Bahama has a diverse ecosystem in its plant and animal life as well as its habitats. Investigating and gathering a record of all these life forms is a key part of developing the systems and driving the adaptation to make the environment stronger.

“The Biodiversity Inventory conducted under the IWEco project and its respective findings show significant signs of ecosystem regeneration, and therefore signs of hope as it relates to Hurricane Dorian recovery,” said IWEco The Bahamas National Project Coordinator Melissa Ingraham. “The inventory, amongst other project aspects, such as the development of an ecotourism sector and capacity building opportunities will be incorporated into a watershed management plan to sustainably guide resource use and management at a community based level.”

The project aims to develop and implement of integrated systems that support ecosystem health and strengthen national monitoring and evaluation systems. Other goals include policy, legislative and institutional reforms to increase capacity for sustainable natural resource management and deepening the knowledge that is key for effective stakeholder involvement.

Source: The Implementing Land, Water and Ecosystem Management in The Bahamas (IWEco The Bahamas)