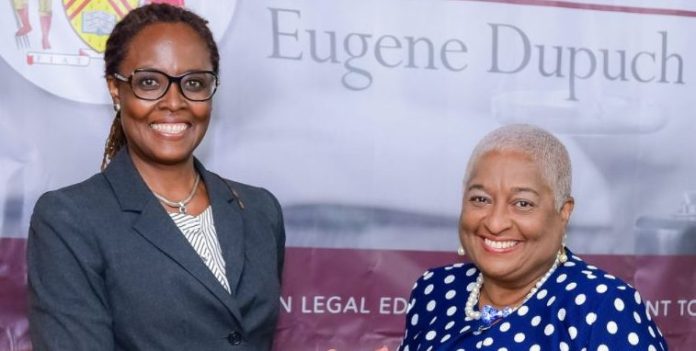 The award’s name is derived from a weekly political and social commentary Smoky Joe Says, which was written by the Hon. Eugene Dupuch Q.C. and published in the newspaper and aired on radio. The award itself is designed by Bahamian fine artist and ceramicist, Jessica Colebrook. Justice Bowe-Darville has achieved an outstanding legal career, spanning over 35 years. She began her legal studies by way of an articled clerkship at Bostwick and Bostwick, under the tutelage of Mr. J. Henry Bostwick and after four years sat the Bar Examinations and was
admitted to The Bahamas Bar in May 1985. She had previously completed undergraduate studies in History and Latin American and Caribbean Studies at the University of Waterloo and York University in Canada.

Justice Bowe-Darville practiced at the private Bar at Bostwick & Bostwick and later Graham Thompson & Co. In 1994, she accepted an invitation to become the Senior Executive Assistant to then Prime Minister the Rt. Hon. Hubert Ingraham, a position she held for 4 years
before returning to practice at the law partnership of Bannister & Co., which became Commonwealth Law Advocates.

On May 30, 2019, Justice Bowe-Darville was appointed as a Justice of The Supreme Court of the Commonwealth of The Bahamas an office she held until December 2021.

Over the course of her career, Justice Bowe-Darville also served on many Boards and participated in countless organisations, both governmental and non-profit. In describing her longstanding relationship with the Eugene Dupuch Law School, Principal Tonya Bastian Galanis, stated, “Her support of our school has been unstinting, having served as a beloved faculty member for 16 years, mentor to many students, guest speaker on numerous occasions and a respected member of many committees of both EDLS and the Council of Legal Education.

During her tenure as President of The Bahamas Bar Association, the Association partnered alongside EDLS in hosting many events, including a Seminar on the Legal, Social and Economic Impact of Gaming in The Bahamas in 2012 and the International Society Of Family Law Caribbean Regional Conference.”

Presenting the esteemed Smoky Joe award, Mrs. Bastian Galanis opined, “Justice Bowe Darville has made invaluable contributions not only to the Eugene Dupuch Law School and the Council of Legal Education but also to our wider community in The Bahamas and beyond. Although she wears many hats as judge, lawyer, historian, author and community leader, in my view, Justice Bowe Darville is really a teacher at heart.”

In her acceptance speech, an elated Bowe Darville, expressed her immense gratitude to the Eugene Dupuch Law School for the award, “I am humbled and honoured to have been chosen as this year’s recipient of the “Smoky Joe” award. It is a fitting recognition and acknowledgment of my contribution to the Eugene Dupuch Law School, the Council of Legal Education,the legal profession and my country. I am grateful for this award and will cherish it. A wholesome salute to Smoky Joe!”