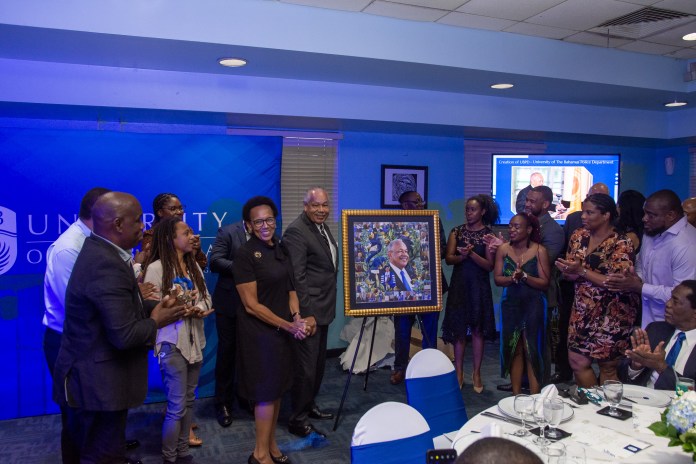 For eight years Dr. Rodney D. Smith has served as President of University of The Bahamas, helping to create a foundation for a world-class university deeply focused on its mission of supporting and driving national development. On Thursday 28th July the University community of trustees, administrators, faculty, staff, students and friends paid homage to his leadership legacy and impact during a special farewell dinner held at the Choices restaurant at UB’s Oakes Field Campus. The event featured cuisine prepared by all-star alumni chefs.

Chair of UB’s Board of Trustees, Mrs. Allyson Maynard-Gibson QC highlighted key accomplishments under Dr. Smith’s leadership including the university’s digitalization and award-winning impact on the student experience, enhanced infrastructure development and an increased focused on the growth of University of The Bahamas-North.

“The role of the University president is not an easy one,” said Mrs. Maynard-Gibson. “I have spoken with Dr. Smith at least once a week since January. I can and I do confirm that he deeply considers the impact of his decisions on people, UB, and on other institutions and the wider society. He is a man who speaks truth to power, and for this as well as other things, he has my respect. History will forever record that he is the first president of University of The Bahamas, and he has led this University for almost a decade. President Smith has made pivotal decisions to create the foundation for us, together, to take UB to the next level.

“UB has grown under President Smith’s leadership; not just bricks and mortar, but all stakeholders, especially our students and national institutions that increasingly rely on UB for research, assistance, and advice. He has maintained assiduous focus on UB’s role in national development.”

Expressing his gratitude, Dr. Smith acknowledged the challenges of leadership but affirmed his love for the institution and UB’s role and relevance.

“It has indeed been an honour to serve as president and CEO of University of The Bahamas,” said Dr. Smith. “The journey from college to university; the growth and development of the campuses; working with different governments; the investment of time and sleepless nights; working with a team of top-quality professionals; the enthusiasm of our students; the genuine love for the institution, have all been my inspiration and motivation as we worked at making UB a national university that we could all be proud of. It was not the easiest task to be handled, but with the love and support of my wife Christina, and our children Sam and Sean, it was a challenge I met head on, and I hope, with some grace.”

Minister of Education and Technical and Vocational Training, the Hon. Glenys Hanna Martin said Dr. Smith will go down in history as the man who spearheaded the transition of The College of The Bahamas to University of The Bahamas, a 39-year-old dream of “Father of the Nation”, the late, Rt. Hon. Sir Lynden O. Pindling. On 10th November 2016 — the institution’s historic Charter Day – Dr. Smith was also inaugurated as UB’s first President.

“This in and of itself will be cemented in our history, just as the vision of our forefathers who came before. But his role was not just in the formal creation of the University. He was also the one, I believe, who played a critical role in the crafting of the legislation, and in the implementation of the legislation; in the creation of the various governing bodies. He was engaged in the tremendous groundwork, in the infrastructural redevelopment, including the work and rationalization of the University’s presence in Grand Bahama,” Minister Hanna Martin said.

Others, including Alumni Trustee and Chair of UB’s Alumni Association, Mrs. Jazmine Romer-Rolle, and former Student Government Association (SGA) President and One Eleuthera Chief Operating Officer (COO), Mr. Keyron Smith, also paid tribute to Dr. Smith’s legacy and the impact he has had on their lives.

Welcoming his successor, Dr. Smith presented Dr. Erik Rolland with a special pin with the words “I Love UB” that he and the entire UB community wore when the institution was transitioning to university. While doing so he urged Dr. Rolland to catapult the institution to even greater heights.

“I personally welcome Dr. Erik Rolland to take the reins and work towards the further growth and development of the institution that we all love,” Dr. Smith said. “I am confident that he will do an excellent job and work well with all of our UB family—the faculty, staff, students, donors, and friends.”

As a parting gift, UB’s Board of Trustees presented Dr. Smith with a large collage portrait of himself and various special moments from his illustrious tenure as UB President.

Beefing Up Security At Government Schools

At November’s COP27 climate conference: “decisions will have significant ramifications for our people and nations” – P.M Davis