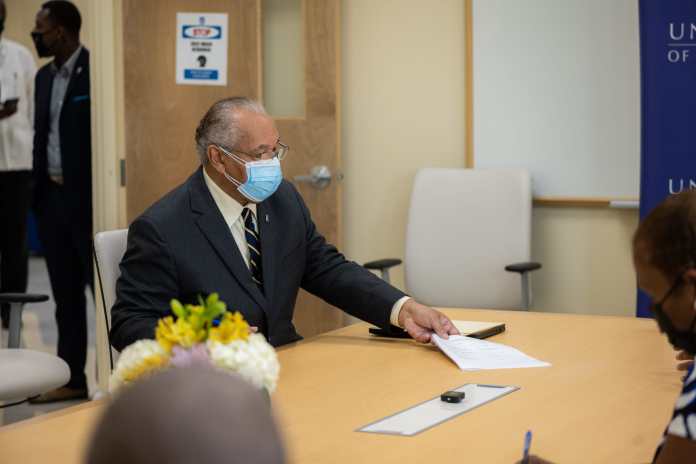 Source: Univeristy of The Bahamas

Nassau, THE BAHAMAS — The glaring need for scholarly, historical publications encompassing the various socio-economic and socio-political forces that contributed to the emergence of the modern-day Bahamas—and honoring the academics that will write them—was the impetus behind a recent significant financial contribution from the Wilson Family Foundation to University of The Bahamas (UB).

On Thursday, 29th July, UB executed a memorandum of understanding (MOU) with Bahamian icons Sir Franklyn Wilson and Sharon Lady Wilson, for the establishment of the Franklyn & Sharon Wilson Awards, which will encourage scholars from multiple academic disciplines to produce full monographic studies on major themes related to The Bahamas’ transition from a British colony to an independent nation, and the first 50 years thereafter.

“The signing of this memorandum of understanding fundamentally does two things: firstly, it recognizes and affirms the very vital role of the University of The Bahamas as a catalyst for research which helps to create and to sustain a Bahamian culture that upholds integrity and confirms truth and fosters sustainable development,” said Lady Wilson during Thursday’s MOU signing. “Secondly, the memorandum of understanding recognizes in a small way that the Bahamian people and all who love The Bahamas must take responsibility for our institutions, since they can only be as good as we help to make them. Everyone can play a part in the building process. It begins only with the inclination to do so.”

Pursuant to the MOU, UB is tasked with issuing a call for the submission of book-length manuscripts on topics of historical, socio-economic, and political significance. The theme of the initial awards will address the fundamental issues of the advancement of collective consciousness and nation formation that emerged from the post-independence era, and what forces, factors, organizations, and leaders in whatever sphere made seminal contributions to the development of The Commonwealth of The Bahamas. However, it is anticipated that the subsequent bestowing of awards will carry a different emphasis.

Regardless of what theme is espoused, UB Associate Professor of History and prominent Bahamian historian Dr. Christopher Curry said the new award scheme demonstrably propels the production of major works of first-rate scholarship under the auspices of the premier tertiary institution of The Bahamas.

“By encouraging writers to produce studies that focus on the period of nation formation, the award scheme addresses an important area of scholarship that has been neglected for far too long,” said Dr. Curry. “Indeed, although there are voluminous studies of the early colonial period and important biographical works on the period of the Quiet Revolution, there is a dearth of scholarship on the post-independence period where the nation was collectively imagined as a community, and a confluence of various forces and factors shaped the development of the Commonwealth of The Bahamas as a unique territory in the Atlantic world.”

The donor has generously committed to providing up to $350,000 to support the first and second Franklyn & Sharon Wilson Awards and to engage with the University relative to funding support thereafter.  The Foundation explained that the financial disbursements plan is strategically constructed to allow persons who feel they are too late to begin the process in time for the 50th anniversary to begin the required research to be eligible for the 55th anniversary. It is envisioned that the Awards will be bestowed every five years thereafter.

Outside of the endowment provided to the finalists, the Wilson Family Foundation will provide generous financial support towards the visual arts by commissioning a Bahamian artist to produce a handcrafted authentic award that will be presented to the writer of the winning manuscript. The selected artist will receive a $5,000 award along with $2,000 for materials to be used in the production of the award.

“I am so very pleased that this is my last act as Chair of Social Sciences in the University of The Bahamas,” said Dr. Bethel.

Besides publishing the manuscripts of the top three finalists, the award scheme provides funding via the existing Stanley Wilson Award to seven writers whose proposals were initially approved by an Editorial Review Board. In turn, those seven scholars will be commissioned to write chapter-length articles that will also be published as an edited collection.

Lady Wilson said such a momentous investment was made in the spirit of establishing and preserving the quest for knowledge as a means of self-development.

“As we approach our 50th year of independence, it is no more than a numerical fact that many who are in leadership positions in our country would not have first-hand knowledge of the facts and of the events that contributed to the development of our sojourn and to the years through independence,” said Lady Wilson. “Initially, it is hoped that this memorandum of understanding would help to fill that void by the time our nation is 50-years-old. The mandate of the memorandum is intended over the future to cover a very wide range of matters relative to our development. The memorandum is structured to last.”

UB President Dr. Rodney D. Smith, in his remarks, noted that all universities around the world have one thing in common: the production and documentation of new knowledge. He said that thanks to Sir Franklyn and Lady Wilson, UB is now strategically poised to produce and document new knowledge, and spearhead more in-depth analyses of historical economic and social factors that have influenced the growth and development of The Bahamas.

“Every developed society has a clear and in-depth understanding of its past,” said Dr. Smith. “This level of understanding comes from asking the kinds of questions of which scholars have the skills to not only interpret, but document into perpetuity. I have no doubt that the works that will be worthy of The Franklyn and Sharon Wilson Awards in years to come, will become historical and literary classics for generations of scholars, both locally and internationally.”

University of The Bahamas