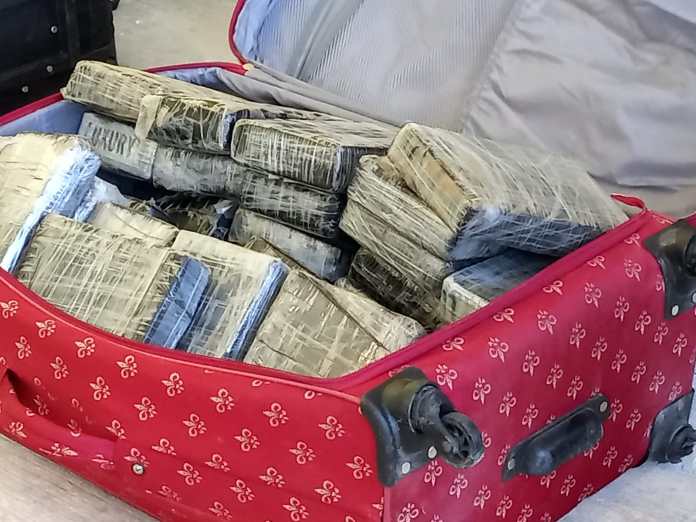 A joint law enforcement operation spanning from Haiti to Cat Island led police to a $1.6 million cocaine bust on Monday.

The drugs contained in two suitcases were flown to the capital by law enforcement.

Based on surveillance, Peters says an aircraft carrying the drugs was observed leaving Haiti around 12:30 Monday and briefly landed on Long Island.

“It later landed on the island of Cat Island where a male was seen disembarking the aircraft with two multi-colored suitcases.

“The male ran into nearby bushes however, one of the surveillance aircraft landed and officers from the craft pursued the male and however he made good on his escape.

“Fifty-eight black packages of suspected to be cocaine were discovered. the estimated street value the aircraft that landed on the island went on to Cat Island where the pilot was later arrested by officers on the island of Cat Island.

“The street value of that cocaine is an estimated value of $1.6 million” he said.

Peters added the pilot was apprehended when the aircraft that landed at the Arthur’s Town Airport landed again in New Bight.

He says the suspect has been flown to the capital.

“He is a 38-year-old Bahamian national who is a suspect in this incident.

“Another suspect is being sought by police at this time.

“It is a possibility that this is a transnational event that’s occurring however we are fortunate that we have our partners in the international seen that are assisting with this investigation” Peters said.