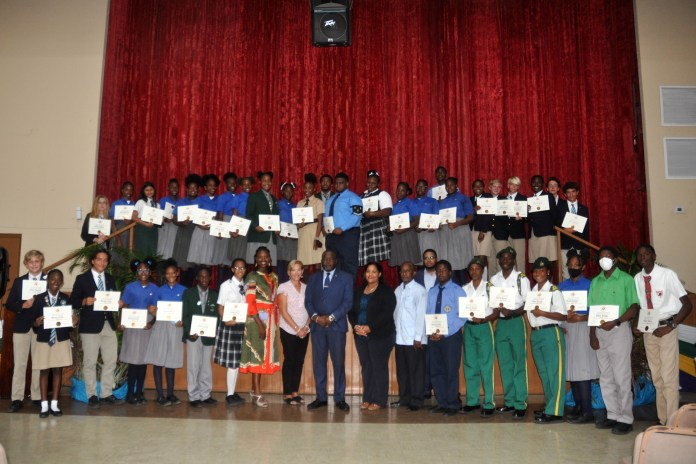 More than 60 students from nine schools and youth organizations received Bronze and Silver from the Governor General’s Youth Award in its first multi-school ceremony in two years.

The event was held Tuesday evening at the Sir Durward Knowles Auditorium.

GGYA is the local operator of the Duke of Edinburgh’s International Award, a non-formal education and learning framework operating in more than 130 countries and territories around the world, through which young people’s achievements outside of the classroom are recognised and celebrated.

During the Award ceremony, Lyford Cay International School proved to be a GGYA powerhouse with its students receiving 24 of 51 Bronze Awards and eight of the 11 Silver presented by the Minister of Youth, Sports and Culture, Mario Bowleg.

The school has embraced the programme which encourages participants to develop skills, increase their fitness levels, cultivate a sense of adventure and volunteer in their community.

Much of LCIS’ success could be attributed to the programme it customized for its students, offering more than the traditional hiking expedition for which GGYA is well-known.

LCIS’ explorations take the shape of cycling expeditions in Eleuthera for Bronze participants, kayaking from Montagu Beach to Rose Island for Silver, and for Gold, young people sail the Exuma Cays guided by George Town’s own experts, Out Island Explorers.

“We have a big uptake in the programme. Between ninth through twelfth grade this year we’ve had more than 80 students involved. Obviously, the majority are in Bronze, but we have 15 students at the Gold level. They haven’t finished the programme yet,” said unit leader Ian Brooks, speaking from the sidelines of the ceremony.

“We do a programme called Round Square which has six pillars. Adventure and leadership are included. They are really integral to making a well-rounded student: taking risks, knowing when to take risks and when not to, teamwork, leadership, communication,” said Mr Brooks, who heads the school’s Humanities Department and teaches classes in geography and history.

“It’s all very important skills that they need to learn in life. So, this programme is really helpful to us because it helps with other parts our curriculum.”

One school coming back onstream after a four-year hiatus was St John’s College. The school had three participants receiving Bronze, which takes a minimum of six months for young people, 14 years or older. Participants must also undergo an expedition hiking at least 15 miles or an exploration spanning two days and one night.

“Since we started last year, we have had a great turn out, about 18 students in grades nine through 12,” said Chariene Cash, who serves as St John’s unit leader and teaches social studies and tourism at the school.

Attaining the Award was a big accomplishment for her students and through their journey she learnt something as well.

“We really pushed to get to this point and they are so proud. It’s been a learning experience for me as a unit leader. This is new to me, so I found that I grew as well in the programme. I have become more involved with my students. So, there is growth potential for anyone who wants to get involved.”

Ishita Rout joined the programme during the pandemic last year. She was the lone Queen’s College student receiving her Bronze Award.

“I wanted to have a new experience that my friends told me about. I had an amazing time although it was really hard and there were many obstacles I encountered. I still pushed through,” said the twelfth grader.

The theme of resilience and overcoming hurdles was also voiced by the Minister of Youth, Sports and Culture.

“Nothing in life comes easy. Your success now is Bronze. You should desire to become Silver. Silver should desire to become Gold. You have to make sure that you continue succeeding in life, each step of the way. You cannot start at the top of the ladder,” said Mr Bowleg, who during his brief remarks motivated participants by sharing his life’s story, beginning as a young person who paid his own way through college and tracing his career path from security officer to branch manager at a bank.

“Keep on the journey. Whatever you learn, whatever you do in GGYA teaches you and prepares you for the future.”