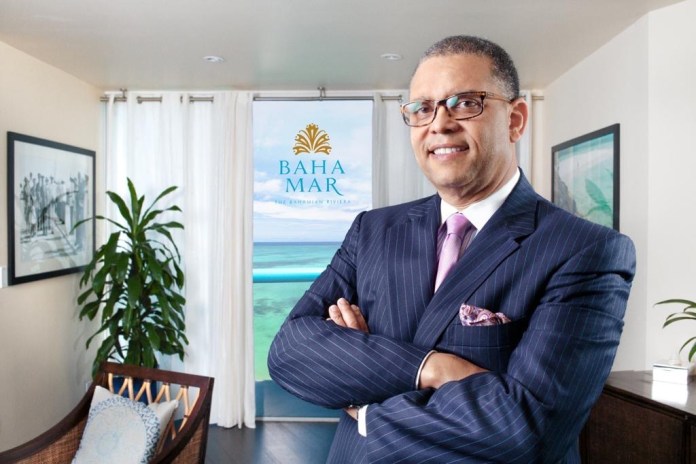 Calling homeporting a ‘win-win’ for the country, president of the Bahamas Hotel & Tourism Association Robert ‘Sandy’ Sands this week lauded the potential of Royal Caribbean’s plans to homeport in Nassau this summer, declaring it would boost airlift, help fill hotel rooms, and provide opportunities for professional services, jobs, vendors and an uptick to a comeback economy.

Representatives from the hotel and cruise sectors met to discuss the initiative and its potential impact on both industries.

Sands was realistic about the past, saying it provided context for next steps.

“We have not always seen eye-to-eye,” noted Sands, a veteran of the hotel industry who is also senior vice president of Baha Mar.

Homeporting, he said, changes the historic dynamic. “Homeporting will be the beginning of a new chapter in our history.”

Traditionally, Sands said, hotels in The Bahamas average 70% occupancy, leaving 30% empty, earning no revenue though operating costs continue. Additional airlift negotiated to deliver passengers to Nassau to embark on their cruise will help fill those vacant rooms. Guests may want to stay in Nassau or go to the Family Islands after their cruise as well and the more time the ship spends in The Bahamas, the greater the demand for local services.

Royal Caribbean will begin homeporting in The Bahamas with Adventure of the Seas, a vessel that carries 3,800 but will initially sail with about 50% of that number of guests to maintain physical distancing protocols. The first cruise is scheduled to board in Nassau on June 12. Throughout the summer, it will sail on seven-day trips that include a day in Grand Bahama.

“We can see the synergy between the cruise and hotel industry as a result of the agreement for homeporting and for the first time, we will work together for the benefit of the destination,” Sands said.

It was the first time Benford and Sands had met, a symbol of the distance that divided the two sectors of the same industry in the past.

“It is wonderful to be here sitting with the hotel industry and with a leader like Sandy Sands,” said Benford. “It’s an exciting time. You no longer will need to choose hotel or cruise – you can enjoy both and together, thanks to homeporting, we will help reinvigorate the economy as we recover from the pandemic.

According to Benford, Royal Caribbean is reaching out to local suppliers for food, beverage, trucking, ferry services, attractions and excursions, security, professional services and more. The vessel will refuel and re-stock in Grand Bahama as well as taking supplies on in Nassau.

“The economic opportunity and impact for the small to medium size business, even larger businesses, is in the millions of dollars,” he said.

Royal Caribbean has taken several steps to reach out and encourage business to seize the opportunities he says await. More than 620 people participated in the Bahamas Chamber of Commerce and Employers Confederation and Grand Bahama Chamber of Commerce workshops sponsored by Royal Caribbean providing specific details about how to apply to be a vendor. The company has also provided a $250,000 grant to the Small Business Development Centre to help fund businesses it believes have a product or service that would qualify.

But, says Sands, there is one caveat – if The Bahamas is going to excel at homeporting and wants ships to continue to begin and end cruises in the country, those who are participating in the exercise have to up their standards in service.

“We are on the precipice of something major,” he said. “But we only get one bite at this apple.”