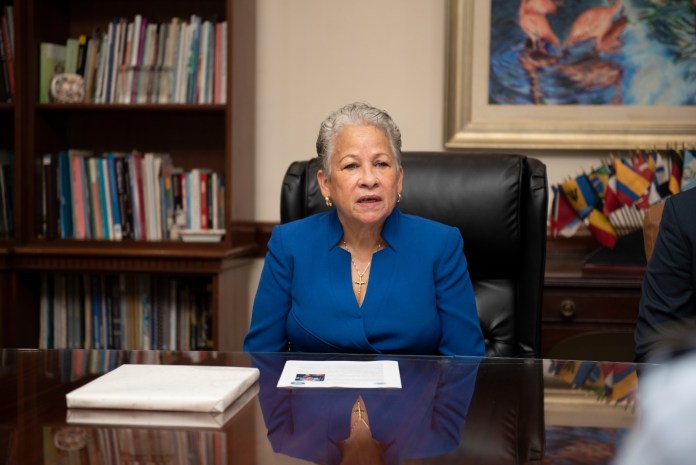 Fostering healthy connections between our country and organizations such as the United States Coast Guard, remains one of the top priorities of the Government of the Bahamas to drive a spirit of collaboration across countries. Rear Admiral Brendan C. McPherson, Commander of the Seventh Coast Guard District and U.S. Chargé d’Affaires Usha Pitts, paid a courtesy call to acting Prime Minister Glenys Hanna-Martin today, November 30th 2021, at the Office of the Prime Minister.

The courtesy call, which was the first duties for the acting Prime Minister’s, served to strengthen the bilateral maritime law enforcement partnership with the government of The Bahamas and acted as a reminder of the longstanding positive relationship between the Bahamas and the United States Coast Guard.

Rear Admiral McPherson who expressed to the Acting Prime Minister Hanna-Martin that the shared relationship between our nation and their organization is good stated, “Out of all of the country’s we deal with, some 34 nations, the agreement with the Bahamas remains the strongest and most effective and it’s an example to others.”

Acting Prime Minister used the opportunity to express that some areas of major concern for the Bahamas were human, drug and weapon trafficking. She also conveyed her hope for collaboration with the U.S Coast Guard on addressing these matters, particularly weapon trafficking.

“These are real issues, and I hope that we can really address trafficking with weapons because it leads to crime in our country and a lot of social ills,” she said.

Acting Prime Minister thanked them for their continued collaboration and articulated how important the role of the U.S Coast Guard has been to the Bahamas, specifically in dealing with rescues. The U.S Coast Guard will present a vessel confiscated by the U.S Government
to the Government of the Bahamas at the Coral Harbor Base today.

Source: Office of the Prime Minister of the Commonwealth of The Bahamas