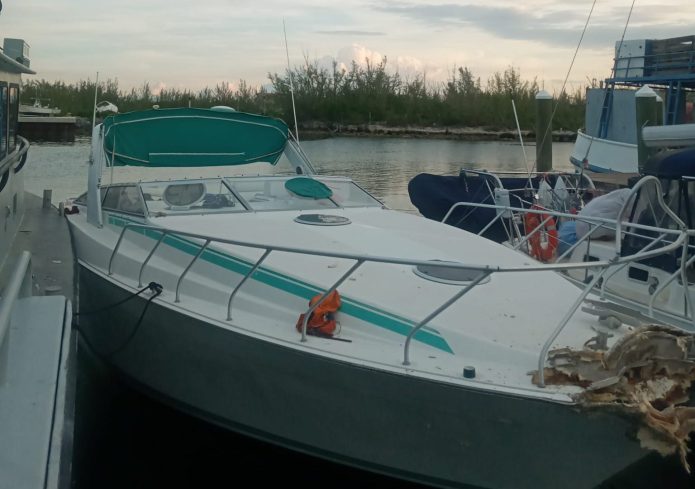 A total of thirty-seven Haitian migrants were brought into the capital after they were apprehended during a joint operation by members of the Royal Bahamas Defence Force and Police Force late Wednesday night. After receiving information of a possible human smuggling operation in the western part of the capital, HMBS MADEIRA under the command of Sub Lieutenant Thomas Thompson was dispatched to investigate. After arriving to the area of Goulding Cay shortly after 8:00 pm, they discovered a 35-ft white pleasure craft named “Blue Water”. While fleeing the scene, the vessel also attempted to ram the Defence Force craft but was subsequently subdued.

Onboard the vessel were suspected migrants (21 males, 11 females and 5 children), who were resultantly apprehended and taken onboard HMBS MADEIRA. An ongoing search is also being conducted for another individual, who reportedly jumped overboard. The migrants were being smuggled from New Providence to the United States early Thursday morning along with the suspected vessel, which was brought in by a RBDF safeboat. All the occupants were handed over to Immigration officials for further processing.

This arrest follows the apprehension of two individuals of mixed nationalities suspected to be involved in a possible human smuggling operation from New Providence to the northern Bahamas earlier Wednesday afternoon. Members of the Defence Force personnel attached to the Bimini Detachment, assisted by local fishermen, apprehended the suspected men and vessel in the Bimini area, after they were alerted by members of the United States Coast Guard. These individuals were turned over to the relevant authorities for further investigation. The Royal Bahamas Defence Force remains committed to collaborating with local and international partner agencies, and the fishing community, while protecting the territorial integrity of The Bahamas and keeping our borders secured.