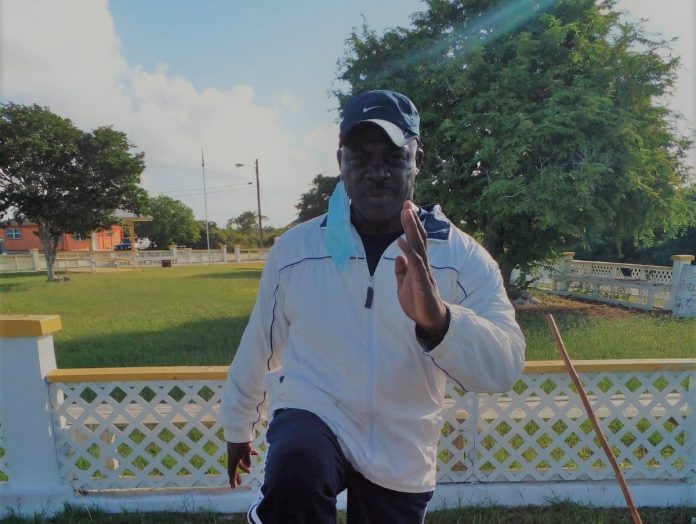 Ask Jeffrey Arnett who he is and the first thing he says is athlete. From martial arts as a child to basketball as a teen, to running and brisk walking when he could no longer run, the incredibly fit Arnett nearly had to pack it all in with debilitating deterioration until surgery at Cleveland Clinic Florida gave him his life back. At age 57, the man who only a few years ago could not even sit or lie down without pain, who could not tie his own shoelaces, now runs, does squats and feels like the full measure of who he remembered being.

Arnett, a native of Inagua who spent 37 years at Morton Salt before retiring, was in his late 20’s when he first felt an intense pain. The sensation worsened over the next few years but remained bearable until one day, making a fast break in a basketball game, he felt a searing pain so severe it was like a sword poking him in his pelvic joint.

At first, he thought it was a muscle sprain, but the pain was so persistent that Arnett had to give up basketball, redirecting his energies to helping young children in the community, teaching martial arts and sports. Still, he could not shake the pain. Over the next years, he sought medical help at home, in the Dominican Republic and in Cuba. It was a doctor in Nassau who correctly diagnosed his problem as a severely arthritic hip joint but advised against hip replacement because of Arnett’s young age, saying he would have to undergo the surgery and recovery again in 10-15 years so suggested he hold out as long as possible.

Six years later, still with pain his constant companion, Arnett travelled to Cuba for a second opinion where he was told he had the hip of an 80-year-old man. He completed therapy in Cuba, discontinued running and took up brisk walking instead. But his condition continued to worsen. His disfigured left hip joint had caused one of his legs to become shorter than the other, leaving him with a limp.

Years later, at age 54, resigned to the need for a hip replacement, Arnett turned to Cleveland Clinic Florida (CCF), the hospital that had saved his life four years earlier in what doctors called a miracle of timing following a harrowing trip with blood clots blocking oxygen and experiencing deep vein thrombosis, causing him to blackout. In that life-and-death scenario, where any breath could have been his last, Arnett had one stroke of good luck after another, with Bahamasair flight attendants even booking his transportation upon landing after the flight was held up for 90 frightening minutes due to a storm. When he arrived at the Weston, Florida hospital, suffering from multiple blood clots (pulmonary embolisms) that had passed through his heart and into his lungs, doctors whisked Arnett into emergency surgery. Two larger clots (deep vein thrombosis or DVT’s) were found in his pelvic artery which would have killed him had they become free. He calls it “a miracle” they caught them in time and he was still alive.

CCF performed a microscopic operation with two injections in the neck to place an inferior vena cava (IVC) filter in the main artery in his stomach to stop clot from travelling up Arnett’s leg, and ran an endovascular catheter-vibration system (echo-vibration) through the heart and to the lungs to gently break up the clots in the lungs. Doctors told Arnett few people who suffer blackout from clots ever wake up. Arnett praised God for his safe recovery.

Now, four years later in April 2021, Arnett was back at Cleveland Clinic Florida, this time for the hip replacement surgery he had put off until he could not take the pain any longer. It was so intense he could not lie down. Tying his shoe laces was impossible. Bending sent knife-like slivers through his body. Arnett’s wife, Darcia, contacted Cleveland’s in-country representative, Shenika Nesbitt, and the two worked together to arrange his appointment with CCF’s orthopedic team, including his flight, transportation and accommodation.

The hip replacement surgery was conducted by orthopedic surgeon Dr. Preetesh Patel, “I wanted to give Mr. Arnett a frank, honest assessment of his condition which I could tell was very painful, debilitating and affecting his daily life. It was important help him understand why surgery was the only viable option at that late stage,” said Dr. Patel. A filter was placed in Arnett’s stomach to prevent potential blood clots due to his history of clotting, and on April 15, 2021 the two-hour hip replacement surgical procedure was successfully completed.

Eight months later and back home in Inagua, Arnett says “I have a new lease on life and feel like my old, active self again. I can now walk, raise my knees, squat and more with no shooting pains, like nothing ever happened.”

A 4-5 inch incision which will fade in time is the only physical evidence of the surgery.

“Everything at Cleveland Clinic in Florida was good and the doctors and staff treated me very well; they made me feel so comfortable,” Arnett said. “Had I known the process would have been so easy, I would have done it 100 times over before. My only regret is not having the surgery done sooner.”

Recently retired as a Maintenance Supervisor from Morton Salt after 37 years of service, Arnett thanks God and the team at Cleveland Clinic, Florida.  He will also be forever be indebted to his wife, Darcia, his daughters, Maya and Asia, his Mom and other close family members who shared the journey with him. He considers himself today a “walking miracle.”

The Future Of Local Government