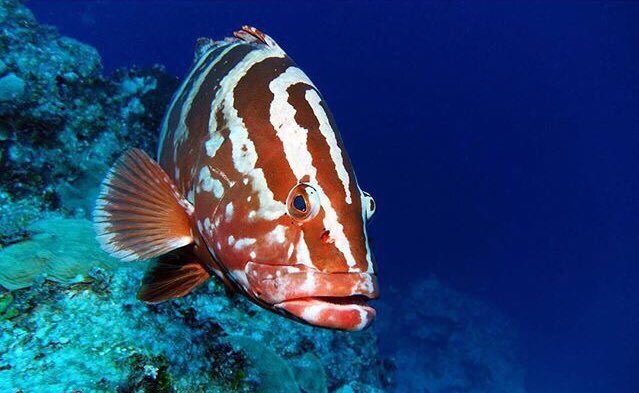 Animal release stories are always heartwarming but this one may be the most special of them all. Imagine witnessing the return to the wild of a school of Nassau Grouper that were raised in observation tanks over the course of a number of years and tended to by marine biologists.

It does sound a bit far fetched and almost like science fiction but for the team at Tropic Seafoods, that is exactly what happened. Led by Jon Chaiton, the team at the country’s leading buyer and exporter of marine products wanted to explore the potential for raising the Nassau Grouper and other species in captivity. A venture like this had never been done before in The Bahamas and given the high demand and volatility of this species survival, it was an important idea to examine.

In February of 2017, fishermen already doing business with Tropic throughout The Bahamas pitched in and captured a number of smaller immature grouper species for the experiment. A total of 46 wild Nassau grouper at an average weight of 3-10 lbs launched the program. Chaiton and his team set up feeding tanks on Tropic’s campus that would hold the animals at each stage of their development in temperature controlled tanks regulated to mimic the natural habitat of the groupers.

The fish were fed a diet of squid, shrimp, capelin and fish. The idea behind this effort was also about the sustainable harvesting of the grouper as well as figuring out the best conditions for grouper to spawn. And that they did, not long after being placed in the tanks. More than 50 Million eggs were collected and released to the wild.

Then, after almost four years of research, trial and error, reality set in. Raising grouper and jumpstarting a successful spawning school while in captivity is incredibly difficult scientifically and financially. In one case, the team sent more than 100 sample candidates for new grouper to a University in Florida and less than 15 made it thru. The viability of farming grouper was not good and the decision to release the animals back into the wild was made.

According to company principal Ben Frisch, the disappointment of not being able to commercially exploit their efforts was bouyed by the fact that valuable research data was collected over the 8 years of the program. “We were able to see some things that you just don’t see in the wild with these grouper and we were more than happy to pass that information on to researchers here in The Bahamas and abroad” he said on the morning of the release.

At approximately 11:20 AM on Wednesday August 4th, the team at Tropic Seafood packed up the first group of grouper fish into a specially regulated tank in the back of one of the company’s delivery trucks and made the drive from its Gladstone Road plant to Jaws Beach on the extreme western tip of New Providence. This location was ideal not only because of how close it was but also for the deep waters nearby. One by one, the large fish, some weighing up to 25 pounds, we netted and gently placed in the waters at Jaws Beach. Amazingly, the fish had become so adapted to their keepers that a few of them circled back to the shore as if they didn’t want to leave or perhaps, were saying a goodbye. At one point, Jon and his daughter had to swim the fish out to deeper waters where their curiosity led them to swim away. They had been swimming in circles in a tank for 8 years and were finally free in the wild.

On hand for the release was Fisheries Officer in the Science and Conservation Unit of the Department of Marine Resources, Dr. Lester Gittens and his colleague Ervanna Moss-Rolle. According to Dr. Gittens, “this type of work is very important to The Bahamas because aquaculture, at the end of the day, is another way to provide food and livelihoods and in our new Fisheries Act, we seek to implement new regulations that would support the industry.” He continued by thanking Tropic Seafood for the information gathered over the last 8 years of the operations, citing the importance of it to our national conservation efforts. He also reaffirmed the government’s commitment to supporting efforts in the aquaculture field through its support of ventures such as Tropic Seafood.

With the grouper experiment over, the company has shifted it’s aquaculture focus to farming the American Red Snapper and have been having tremendous success in that regard.