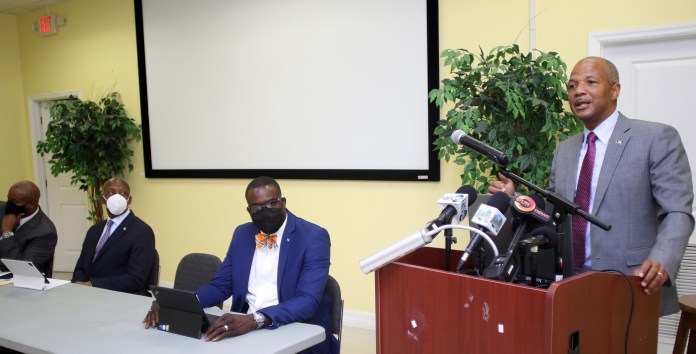 The Ministry of Works and Utilities is adopting a “comprehensive” approach to mitigate the issue of flooding in New Providence. Drainage cleaning, a pilot drilling project, aggressive maintenance program, conventional wells, installation of new systems in open spaces are among the mitigation measures that the Ministry is using and/or proposing.

The Hon. Alfred Sears, Ministry of Works and Utilities said the “usual” cleaning of swales and wells is not sufficient.

“Given the projection that this will be a very active hurricane season and the fact that two years ago we had a Category 5 [hurricane] where communities in the northern region were devastated; loss of up to $3.4 billion: it is time that we take a more comprehensive approach to the issue of flooding.

“New Providence — where we live — is an unplanned city. The cart has been well ahead of the horse. We’re not trying to rectify as we seek to mitigate. Therefore, we started early in terms of the drainage cleaning.

“These various mitigation measures will be integrated and you will also have a number of other measures. A dam system; the tiger dam, again another measure of ensuring that water does not settle on the road or surface but is moved…, but allows the habitable areas, and for areas traversed by the public, very quick dissipation or transfer of the rain water where we see settling,” said Minister Sears.”

He addressed media during a press briefing Thursday, May 19, 2022 at the Town Planning Hearing Room, University Drive. The event was attended by: the Hon. Mario Bowleg, Minister of Youth, Sports and Culture; the Hon. Myles Laroda, Minister of State in the Office of the Prime Minister; the Hon. Vaughn Miller, Minister of the Environment and Natural Resources; Luther Smith, Permanent Secretary; Robert Deal, General Manager, Water and Sewerage Corporation; and Henry Moxey and Francis Clarke, senior engineers.

In a presentation, Mr. Moxey informed that the Ministry of Works is reviewing the ACO StormBrixx system – a prototype pilot project for Pinewood Gardens that will soon go into effect.

“We are looking to deal with the areas that are most prone to flooding. The ACO system that we will be utilizing as one our drainage strategies to address the flooding systems in Pinewood is not for a short period of time, but in perpetuity.

“We are hopeful that by having an area where more water can flow into to get off the surface, under the surface and into pipes would be more effective.

“The approach to the whole drainage strategy is somewhat holistic. We’re not just simply looking at an isolated area but an entire area and we need the requisite data from our Department of Geographical Information Systems, the Met Office, the environmental arm — all the sectors we work hand-in-hand with to accomplish the task we that been mandated to accomplish,” said Mr. Moxey.

Moreover, Minister Sears explained that designs for the ACO system will be installed under a number of open spaces including parks and basketball courts.

“There will be a disruption for a period because the infrastructure will be installed underground and then resurfaced. The park will have the same function; but you will have an infrastructure under the park for the collection of water.”

An inter-disciplinary team has been organized to address water issues, which result in deterioration of roads and contribute to creation of potholes.

“The road experts are looking at certain roads which are vulnerable to the settlement or pounding of rain water and some of those roads will be elevated. I understand that the technical standard being applied is to elevate the roads up to five feet, and in some cases six.

Further, Minister Sears advised that teams have been assembled to review and strengthen land use and the Building Code, a Land Use Plan for New Providence will be published in conjunction with the Minister of Environment and Natural Resources, amendments to the Planning and Subdivision Act will be presented to Parliament and legislation will put forward to use third party inspectors in the construction of large scale commercial and subdivisions.

“We are using this as an opportunity to consider whether we should consider a new act in light of the climate change challenges and the commitment of the government to build resilience.

“It is changing how we do business — while we institute various mitigating factors to deal with our country as it is” — moving forward will require building differently, with more resilience.

“With respect to the regulatory infrastructure we are also looking at where our resources may be insufficient: you will have qualified engineers who can serve on behalf of the Ministry as was what could be called ‘third party inspectors.’

“We’re looking at a comprehensive approach, rather than a Band-Aid approach,” said Minister Sears. The Ministry proposes implementation of the measures over a span of three years.