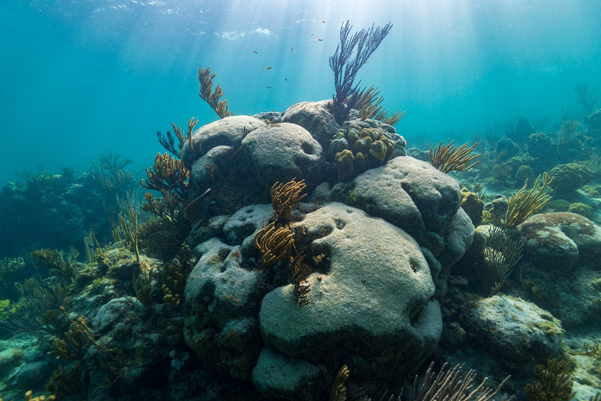 The first scientific assessment into Stony Coral Tissue Loss Disease (SCTLD) in The Bahamas highlights the need for early detection and rapid response to an underwater outbreak causing the greatest decline in a decade to coral populations.

In a new study published in the journal, Frontiers in Marine Science, a team of researchers confirmed a theory first espoused by the Perry Institute of Marine Science in April 2020, that tainted ballast water brought SCTLD to Grand Bahama sometime in 2019, and from there, the disease rapidly spread to New Providence.

Strengthening the hypothesis is the fact that no SCTLD has been reported near Bimini, the island closest to Florida. The southern state has been affected by SCTLD for at least five years.

“Freeport and Nassau are the two largest container ports in The Bahamas and are over 200 km apart with multiple islands between them where SCTLD has not yet been reported. It is probable that SCTLD arrived in The Bahamas via commercial shipping, followed by rapid spread within islands via local currents and other vectors,” according to the research article posted earlier this month.

“Bahamian reefs could experience local extinctions of at least three species that are already rare. At least one coral species is at risk of becoming extinct locally due to SCTLD,” said the study’s lead author, Dr Dahlgren, a recognized expert in tropical marine ecosystems.

Corals are the engineers that build a valuable, diverse marine ecosystem. Without them, the ecosystem collapses and reefs lose their function.

“The rate of spread of SCTLD is a great concern and challenge for the management of reefs. The absence of SCTLD from surveys of Grand Bahama and New Providence in 2019 but a widespread occurrence across at least two thirds of the reef area in 2020 for both islands indicate a rapid spread of the disease,” said co-author and marine biologist, Dr Pizarro.

Once reaching The Bahamas, researchers suggest the spread of the disease within reefs was likely due to several factors – direct contact with contaminated ships, diving equipment, fish, water currents and Hurricane Dorian.

“Smaller vessels including commercial and recreational fishing boats, yachts, and inter-island mailboats may have also contributed to the spread of SCTLD within each island and to other parts of The Bahamas, like north Eleuthera Island where SCTLD was confirmed in December 2020,” the study stated.

The research intends to provide marine resource managers with information on where the disease occurred and what species were affected in a short timeframe. Moreover, the study identifies which coral species could suffer local extinctions and makes recommendations for antibiotics and the adoption of other measures such as coral rescue facilities to prevent loss of these species locally.

Scientists believe the disease could be contained through effective regulation of ballast water transfer, implementing policies relating to pumping, dumping and disinfecting bilge water, and minimizing other human spread.

A deadly disease, SCTLD infects over 20 species. It is waterborne and highly transmissible. It could linger in an area for several years, swiftly reducing colony density and living coral tissue. The cause of the disease is unknown.

According to the study, reefs closest to Grand Bahama and New Providence main commercial shipping ports recorded the greatest number of coral death and infection rates for the most vulnerable species. The further away from the port, the healthier the corals.

In New Providence, direction of the corals in relation to the port also played a factor. Sites to the east of the port were generally healthier when compared to sites west of the port, where nearly the entire coastline was affected by SCTLD.

When it came to Grand Bahama, depth was a significant factor in influencing the proportion of colonies that were healthy. Death and infection were more prevalent in shallow reefs.

There was one bright spot identified. Resistance to the disease was slowly taking hold in a case of survival of the fittest. Although there is an increase in new deaths, scientists observed a decrease in active infection for most species on both islands. The proportion of healthy corals, however, remain largely unchanged.

The study entailed rapid assessments of 25 reefs off Grand Bahama conducted in March 2020 and six reefs off New Providence in June 2020.

Surveys began at sites where SCTLD had been reported for each island and extended outward along the reef from those locations to assess the extent of the disease outbreak for both islands. A second set of surveys for both Grand Bahama and New Providence was conducted in January 2021 to examine changes over time at previously surveyed reefs and at additional sites to determine the spread of the disease for each island.

These last surveys were comprised of 16 sites in Grand Bahama, including 11 of the previously assessed sites, and 29 in New Providence, including all sites surveyed in June 2020.

“Results from this study stress the need for early detection and suggest that preventing the spread of the disease between islands via vessel traffic is of utmost importance,” the study noted.