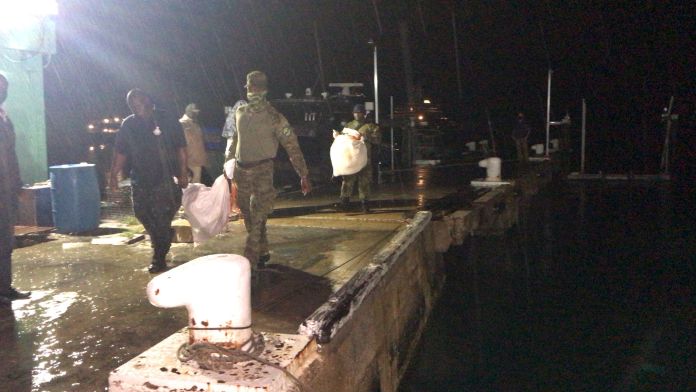 Two adult males expected to face formal charges in the magistrates court this week in connection with a million dollar drug bust in Exuma over the weekend.

Police Press Liason Officer, ASP Audley Peters says the incident unfolded sometime around one o’clock Sunday after in the area of the Exuma Cays.

He says officers, in a joint operation between the police, Defence Force, and U.S. Coast Guard, observed an aircraft flying at a low altitude in the area of Stevenson.

He says after the males were taken into custody they were transported to New Providence.

“Officers observed two males dropping an item, two items rather, out of the aircraft.

“The aircraft continued north on to Staniel Cay where it landed while at Staniel Cay. Two males were arrested ages 59 and 27.

“In the area of Stevenson the officers found these two white crocus sacks, and on examining the crocus sacks they discovered that they contained suspected cocaine.

“A count of the items was done and 58 packages of cocaine were discovered and they have a street value of about 1 million one hundred and sixty one thousand dollars” Peters said.