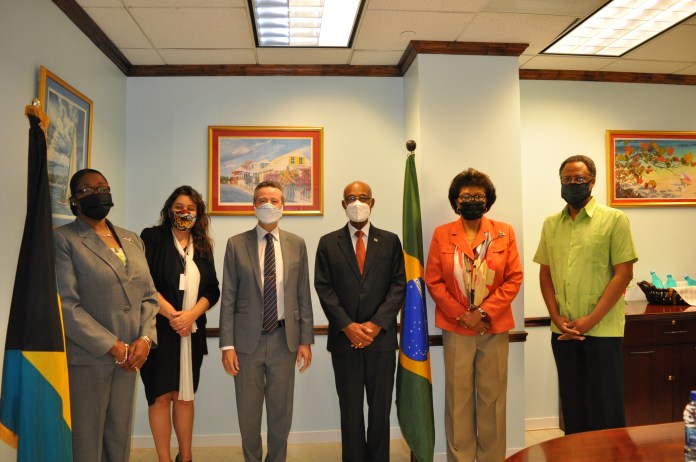 Minister of Education the Hon. Jeffrey Lloyd received a courtesy call from Ambassador of the Federative Republic of Brazil to the Commonwealth of The Bahamas, His Excellency Claudio Raja Gabaglia Lins, and Deputy Minister for the Embassy, Mrs. Mari Carmen Rial Gerpe, on May 14, 2021. Other education officials in attendance included: Mrs. Lorraine Armbrister, Permanent Secretary; Ms. Serethea Clarke, Undersecretary; and Mr. Marcellus C. Taylor, Director of Education.

Minister Lloyd welcomed Ambassador Lins and exchanged gifts during a photo opportunity. They discussed many important topics including the possibility of a student exchange programme between The Bahamas and Brazil. Ambassador Lins further informed that the Brazilian Federal University for Latin American Integration has opened registration for Latin American and Caribbean students. He spoke of the many top rate universities that would readily accept Bahamian students, placing special emphasis on universities in São Paulo, which offer medical programmes. Minister Lloyd responded by informing the Ambassador of the many countries Bahamian students are currently studying in all over the world, and furthered that Bahamian students would be interested in studying in Brazil as well. Ambassador Lins noted the goals of the Bahamas Ministry of Education, and explained that Brazil has similar goals for their students, in increasing the graduation rate from 50% to 85% by 2030.

After an informative discussion on culture, education and agriculture, Ambassador Lins thanked Ministry officials for being so gracious in receiving him. Minister Lloyd, stating that it was truly an honour, thanked the Ambassador, and Deputy Minister for the Embassy Gerpe for choosing to come and meet with the Ministry.