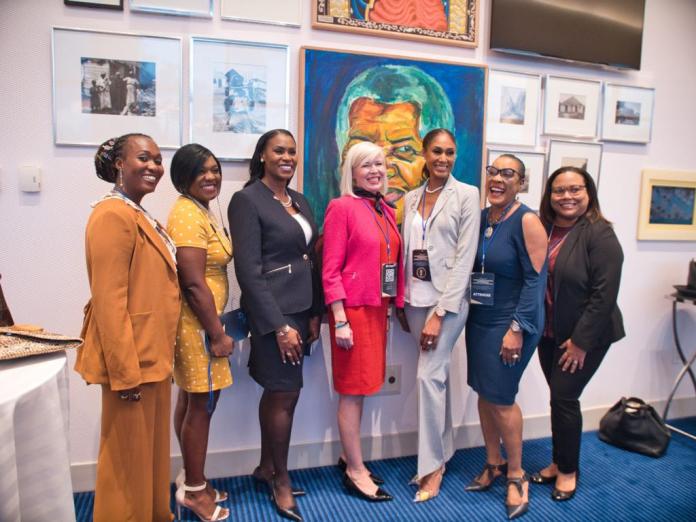 Under the theme of How to Grow the Economy Multiple Times, the Inaugural Investor Ecosystem Seminar was held at Baha Mar. While due to covid restrictions only 100 guests were in attendance, thousands of Bahamians attended the sessions via Zoom and Facebook Media. “People now know that they can directly participate in the growth of the economy and they are excited to do so,” says D’Arcy Rahming Jr. ArawakX Chief Technology Officer. The Investor Ecosystem Seminar was divided into two sessions with the Keynote speakers being Patrick L Young, author of the best-selling book The Capital Market Revolution and his wife Beata Young, Founder of Women on IT, speaking on the powerful role women play in the Investor Ecosystem.

“ArawakX is doing amazing work in the region,” says Exchange Expert Patrick L Young. “Particularly in regards to ensuring that there is a level playing field and all are financially included. It is incredible that they have already signed up almost 2% of the population after launching only 6 weeks ago. And because the ArawakX technology allows for individual investment accounts, they are undoubtedly on the path to success. Even some of the major crowdfunding platforms in the UK do not have that level of sophistication, ”says Young.

Young states that the exchange is the new engine of growth and countries like Poland have been able to grow their GDP 4 times in the last 30 years by the government encouraging pension funds to put some of their money into companies on the exchange. “Additionally, many persons are interested in ArawakX because they can self-direct their own investments by having their own accounts directly with the exchange. This is exactly the trend we see happening with the rise of the retail investor in other parts of the world.”

The event had a guest list of local speakers that delivered on the importance of playing a role in the Ecosystem including: D’Arcy Rahming Jr who spoke on how the Bahamas can participate in the 83 billion dollar fintech marketplace; the Honorable Pia Glover-Rolle who spoke on empowering and encouraging women to business network; Davinia Bain who spoke on Access Accelerator and not being afraid to come forward to develop your ideas; Mitzie Turnquest who spoke on the importance of educating your children in technology; Bria Deveaux who spoke on the ArawakX platform; and D’Arcy Rahming Sr CEO of ArawakX who spoke on how the ecosystem would develop when firms are attracted to Nearshore in the Bahamas because they are seeking Capital raises. The Former Minister of Youth Sports and Culture Dr. Danny Johnson brought remarks on behalf of the Honorable Prime Minister.

“The event was designed as a networking event to introduce people to the fact that the fate of the economy is in our hands. We have the authority to add value through capital raises and professional services to startups both local and international that are domiciled here,” says Rahming Jr. “We want the Bahamas to be known as a great place to do legitimate business with startups and high growth companies that have a huge potential.”

Marcian Cash, CEO of Bahama Myfi Groove, who is listed on the ArawakX exchange, demonstrated his Tourism tech app to an eager audience. On October 25 a Bahamian startup consisting of Women Founders will be launched. Further information can be found about ArawakX and these companies on ArawakX.com.