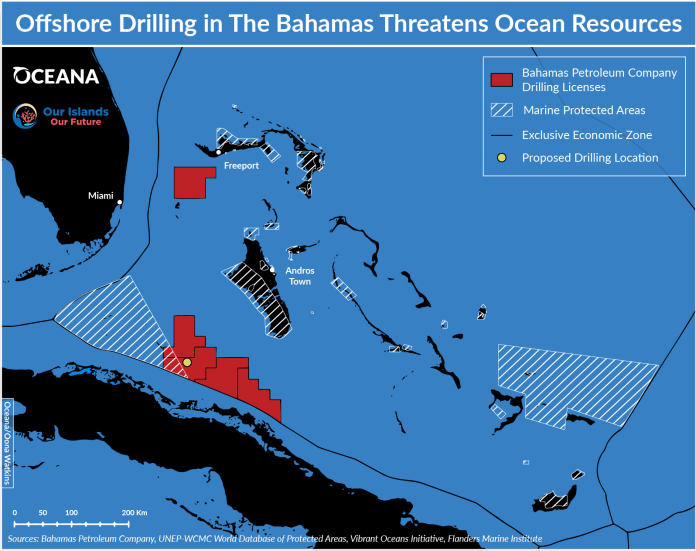 Oil drilling opponents said the February 8, 2021 investment statement on the London Stock Exchange by Bahamas Petroleum Company (BPC) announcing that they are abandoning and permanently sealing their initial exploratory well, the Perseverance #1 which is located between the West Side of Andros Island and the Cay Sal Bank came “with a sigh of relief” as they strongly believe that drilling should not have been allowed to happen. BPC said in the statement that they found oil, but not in sufficient quantities to make extraction commercially viable. BPC said they will review the drilling data and present the information to the Government of The Bahamas in line with the requirements of their licence. Their report states that they hope to monetize the other licenses they hold in the Bahamas.

The Bahamas for now does not seem to have commercially viable oil reserves according to BPC. However the members of the Our Islands Our Future coalition emphasized that The Bahamas does have one of the most recognizable tourism products in the world which would be directly at risk from future drilling. The Bahamas has a world class spiny lobster fishery certified by the Marine Stewardship Council and legendary bonefishing flats that draw visitors from around the world in the vicinity of the exploratory well location. The coalition is looking out for the future of the  400,000 Bahamian  lives and livelihoods that rely on a healthy marine environment.

Upon news of BPC’s failure to discover a viable oilfield for production, Bahamian conservationists and fishers recognised the reprieve, but emphasised  that this does not yet mean our resources are fully secured. Casuarina McKinney-Lambert, the Executive Director of BREEF says “We need a full moratorium on oil exploration and extraction in Bahamian waters. The drilling that took place off the west coast of Andros for the past 48 days caused considerable damage to the seafloor and was a clear threat to our waters and our economy and that of our neighbours. It was a risk to the well-being of our ecosystems and our people who depend on healthy oceans for tourism and fisheries, and ultimately our way of life. This will send the message to the world that we take protection of our environment seriously, that we care about our people, and that we are serious about building a climate-resilient future.”

Dr. Ancilleno Davis, an independent marine and terrestrial ecologist points out that “we still do not have sufficient local capacity to assess the resources we have. We are decades away from having the resources to respond to or recover from a major spill.” Questions still remain about the insurance cover that was in place for the exploration well , including the limits of coverage, the duration of the policy and any potential exclusions should an accident happen.

Joseph Darville, of Save the Bays recently called for transparency as so much is still unknown about the licence agreements signed with BPC, and their obligation to protect our environment if a mishap had happened. “Time and again these oil companies demonstrate they do not protect the best interest of Bahamians.”

The members of Our Islands, Our Future coalition note that this latest announcement by BPC should not distract us from the fact that since last year, well before the start of the drilling, now they have asked for BPC CEO Simon Potter to confirm the amount paid to the Bahamas government for the licence fees.  In 2007 BPC received exploration licenses for five blocks encompassing 3.9 million acres of Bahamian seabed. The fee for these licenses was $250,000 per block per year.  There is still uncertainty regarding the status of those payments.

The recent announcement by BPC now leaves many Bahamians with more questions than answers as to whether BPC  fulfilled its end of the “air-tight” agreement with the Bahamian Government by beginning to drill a even though the status of the license fees was not satisfactorily answered.  “Will BPC have an opportunity to slip away to Trinidad & Tobago without payment of the fees that were required in their binding agreement?” questioned Rashema Ingraham of Waterkeepers Bahamas.

Our Islands, Our Future coalition called  on the Bahamian government to provide much better transparency in its dealings with oil companies and investors by fully  implementing the Freedom of Information Act, a promise that has yet to be fulfilled.  To date only portions of the Act that was passed in 2017 have commenced, leaving sections that give the general public the right to access to records held by government or public authorities unimplemented.  Those unimplemented sections would broadly strengthen transparency and public participation in democracy