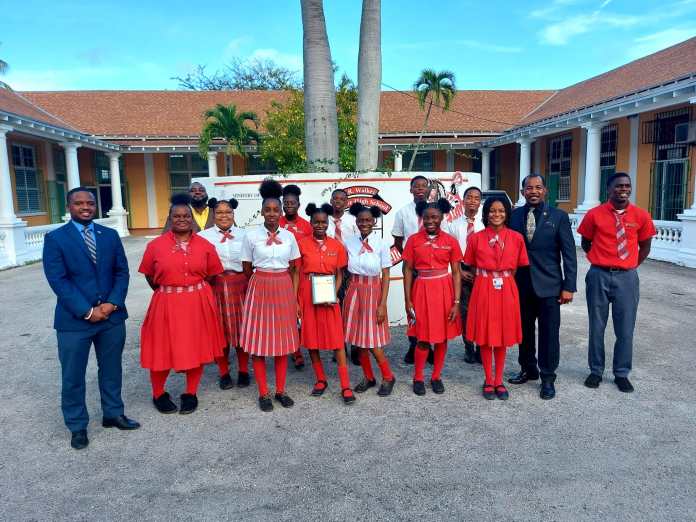 “YLP really helped me a lot. It helped me with my stage fright. It was gone. I didn’t have any,” said the 17-year-old, speaking minutes after the early morning gathering.

While Smith learnt how to up his speaking game, his classmate Wilbenson Celestine had a different takeaway.

“My experience with YLP taught us a lot, how to speak our mind, how to be okay with others’ opinions…and open our minds to new things.”

In perhaps its most aggressive push to date, the First Bahamas Branch of Toastmasters, Club 1600 emerged from the pandemic determined to reach more youth than ever before. Smith and Celestine happen to be two of them.

This year, the public speaking and leadership organization established the Youth Leadership Program at C. R. Walker and the Gavel Club at the Simpson Penn and Willie Mae Pratt Centres for Boys and Girls.

“This caused me not to be nervous when I talk to people. I feel like I can talk to a thousand people now,” said one Simpson Penn resident who served as president of the Motivational Ambassadors Gavel Club. The teen’s name is being withheld since the centre operates as correctional facility for juveniles.

“The program expands my mind. If young people like us could come together as a team and speak for the country [we could] make it a better place,” said the 16-year-old who presided over Gavel Club members’ discussions on domestic abuse, gun violence and Black Lives Matter, among other hot topics discussed over a seven-month span.

“This program helped me to speak about things I never thought I could speak about. It was relief to talk to others about what is wrong, what is right and what this country needs. It feels good speaking to others. It made me feel like I could write a book on various things. It helped me to put my ideas on paper. It’s a program that most young people need.”

Under the theme, “Next Generation Leadership,” President Devaughn Taylor and the 2021/2022 executives of Toastmasters Club 1600 have been busy. For months, they’ve taught young people how to unlock their confidence, organize their thoughts, express their ideas and think on their feet through the two programs geared towards persons under 18.

The shorter Youth Leadership Program is a workshop consisting of eight, one to two-hour sessions that enable teens to develop their communication and leadership skills through practical experience.

Meetings generally follow a format similar to that of a Toastmasters club meeting, with an announced agenda that includes practice in parliamentary procedure, prepared and impromptu speeches and the selection of presiding officers.

Meanwhile, Gavel Clubs provide the Toastmasters experience to those who are ineligible for regular membership due to age, or other circumstances. They function in a similar fashion to YLP but with more restrictions, and last for longer periods.

“We’re living in a time when young people are more comfortable using emojis, GIFs and texts than they are speaking face-to-face or in front of an audience. The isolation of the pandemic made matters worse. The goal is to help break those bad habits formed over the last two years,” said President Taylor.

“Club 1600 recognized we were uniquely positioned to help teens overcome this challenge.  Participants in both programs learnt how to craft and deliver impactful, well-structured speeches and how to speak sensibly ‘off the cuff.’ They now know how to assess speeches and how to give and take constructive feedback. Just as each student improved in their public speaking skill, we want them to continue to excel and to never cease improving in all aspects of life regardless of the circumstances they face.”

Over the course of the program, he encouraged participants “to focus on the man in the mirror and to be fixated on making yourself the best version of yourself.”

Spearheading the club at C.R. Walker was schoolteacher and Club 1600 secretary, Paul Taylor.

“The students found it quite enjoyable to be involved in planning the meetings, but more importantly having full control of the content being shared. They especially enjoyed practicing impromptu speaking during Table Topics sessions.”

Edina Dolcine, president of C.R. Walkers’ YLP was awarded the Anthony Longley, DTM Award for communication and leadership as the participant exhibiting the most growth within the program.

During a recent closing out ceremony, the man from which the Award takes its name, admonished the students to “fill the worldwide call for leaders” using their newfound skills.