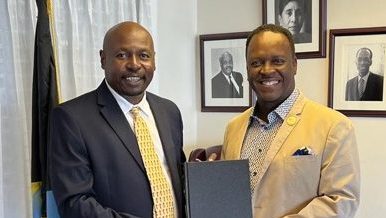 A highly focused, detailed 200-page study by one of the country’s most respected professionals, forensic accountant Dr. John Bain, concluded that the government of The Bahamas has a critical, two-pronged role to play in the gaming industry – to stay apace of the lightning fast growth of technology that enables the industry while constantly monitoring the regulatory process to prevent illegal operations.

Bain, who served as former chief financial officer of the Gaming Board for The Bahamas, took on the study of the gaming industry for his dissertation that earned him a Ph.D. While he completed the academic paper and Bain earned his advanced degree in 2017, he kept the sensitive information sealed until recently. This is the first report of its general contents.

Prior to the 2014 push by the Bahamian government, led at the time by former Prime Minister Perry Christie, to regulate and tax the local gaming industry, illegal gambling, called “numbers”, was widespread across The Bahamas. Only its recent explosive expansion enabled by technology was new, Bain noted, finding a 100-year history of informal gaming in the underground of the country’s economy.

In his report, “The Innovation of Regulations against Cybercrimes and Money Laundering in Bahamian Gaming Houses”, which he wrote as his doctoral dissertation, Bain argues that international concern over the potential for money laundering and terrorist financing through “number houses” drove the Christie administration to regulate the industry.

“One of the concerns the government of The Bahamas is addressing the perception that money laundering and terrorist financing is widespread and may have penetrated the now regulated local gambling industry,” the study reads.

However, Bain notes that a number of factors will determine how well new regulations are adopted within the industry.

Bain’s study, the first to directly interview former illegal gaming operators who were transitioning into the new legal gaming environment in The Bahamas, looks at the diffusion of the regulations using the framework of the Diffusion Innovations Theory.

He notes that in order for the regulation to be successful, there must be buy-in from operators and a true desire for “desistance”, or moving away from illegal operations and seeking to operate solely within the bounds of the new laws.

“The commitment should be demonstrable to the regulators, the Bahamian public, and international bodies with strong influences on international finance,” the study reads.

“It is the international bodies that have the power to label The Bahamas again if there are any suspicions of continued criminal activities of the gaming operators.”

Bain also notes that the government’s ability to keep up with an ever-changing internet-based industry is another important factor in the long-term success of regulation efforts.

He points to cases in the implementation of regulatory systems in European countries, which demonstrated that the systems “inherently lack elasticity and that the very criminals the system regulates are usually quick to re-enter the underground industries when technical innovations, internationalization, or any unforeseen developments create new illegal business opportunities.”

In order to address these concerns, Bain makes a number of recommendations, including that gaming operators be recognized for their innovation instead of “disrespecting” them and regarding them as “criminals and misfits”.

“Instead of the Bahamian society recognizing their talents, the operators complained that they were treated with little respect by the government’s negotiators,” the study reads.

“If The Bahamas and the gaming industry are to grow, innovation should be recognized and encouraged.”

Bain also suggests that the government and regulators be aware of the “hidden danger” in regulating gaming, noting that as it stands, the industry may be overregulated, which he says could encourage individuals to move their businesses back underground.

“Firstly, more studies should be undertaken to get an accurate picture of the actual local gaming industry,” the study reads.

“Afterward, the policymakers are urged to revisit the 2014 legislation for possibly updating the laws to enable the government to be still able to collect taxes, but in a way that would encourage, rather than contain innovation.”

It adds, “The current status is not economically feasible for the long-term as large operators continue to dominate the industry.”

Bain recommends that the laws be thoroughly enforced, pointing to one instance where a business that was not granted a license was still operating “without a license and without adhering to strict regulations, with impunity.”

“The wrong message is being sent and threatens the enforcement abilities of the Gaming Board,” the study reads.

“The action also tarnishes the reputation of the government itself. These types of messages may lead to an increase in illegal gambling, encourage others to go underground or to challenge the gaming laws.”

Finally, Bain recommends that ongoing research be conducted to improve upon the existing legislation.

In particular, he calls for study on desistance in The Bahamas as it relates to gaming industry, as well as studies to further explore the uniqueness of the industry compared to land-based casinos.

In conclusion, Bain notes, “Regulation by itself without a proper and thorough understanding of the vicissitudes of the existing industry does not influence or motivate the stakeholders to believe that the newly regulated industry has achieved the objectives.

“This study supports other literature that suggests that because legalization of an industry occurs, it does not necessarily mean that no more illegal activities persist.

“This study also supports the notion of continuous improvement to the Gaming Act, 2014, where the law was more futuristic and adaptable than the industry itself.

“Additionally, this study supports the notion that eventually, the law will encourage continuous innovations within the industry and stop any anti-competitive and anti-capitalist practices that appear to benefit a few at the expense of the national industry.”