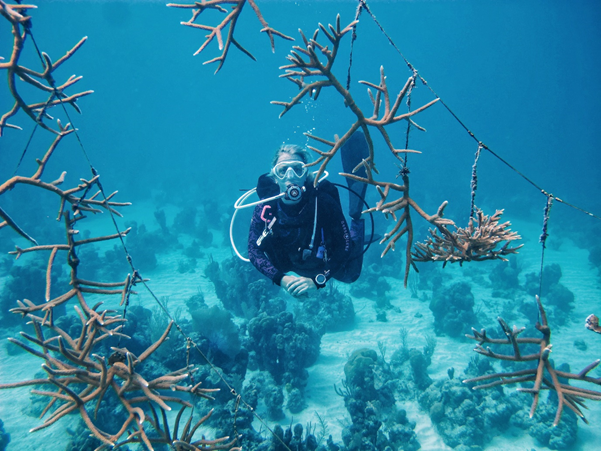 With nearly 27 percent of the world’s coral reefs lost to destructive events and stressors, a newly released study suggests hybridization – a mesh of different species – could save one of the world’s most important and threatened marine ecosystems.

Research published in the journal, Frontiers in Marine Science, found a naturally occurring hybrid coral and its fragmented sections are more resilient and grow rapidly in comparison to its parental species. The study suggests restoration managers use the hybrid, commonly called fused staghorn coral, to outplant degraded reefs and increase the scale of coral nursery projects.

“Coral restoration research by the Perry Institute for Marine Science (PIMS) and its partners demonstrates how we can bring back populations of critically endangered coral species in The Bahamas and help them adapt to their changing climate to prevent them from going extinct,” said Dr Craig Dahlgren, PIMS’ executive director who’s an expert in tropical marine ecosystems.

In the study, “Should Hybrids Be Used in Coral Nurseries?” PIMS identified hybrids’ untapped potential, alongside researchers from Florida’s Nova Southeastern University and the University of North Carolina Wilmington. The study was conducted at three nurseries on Great Stirrup Cay in the Berry Islands from June 2018 to July 2019.

The problem with coral reef ecosystems lie in their decades long decline due to rising sea temperatures, increased disease prevalence, pollution, overfishing, climate change and the like. Finding ways of protecting these natural resources is critical to the continuity of life around the world.

That’s because coral reefs host a range of ecologically and commercially important marine species. They are essential nursery grounds for numerous fish and invertebrates. They protect coastlines from storm damage and support an extensive tourism industry for many island nations like The Bahamas.

To facilitate coral reef recovery and increase abundance and genetic diversity, many conservation organizations throughout the Caribbean create and maintain coral nurseries, sheltered areas for corals to grow faster away from the reef and predators. In this “coral gardening” method, nursery grown reefs are transferred to the ocean during large-scale restoration efforts. PIMS and its coral restoration branch, the Reef Rescue Network, manages 27 coral nurseries on islands in The Bahamas alone.

The study investigated factors that may influence growth and survival of threatened Caribbean coral species and their naturally occurring hybrid at the Reef Rescue Network’s Berry Islands’ nurseries in central Bahamas. One of the study’s main funders, Norwegian Cruise Line, maintains these private nurseries for conservation and research with Nova Southeastern University.

Researchers found nursery locations with optimal depth, moderate water flow, some light and a limited range of temperatures will likely lead to the most successful coral fragment survival and growth.

Of the initial 157 fragments, 66 (or 42 percent) survived to the end of the 13-month study period. For those that didn’t survive, most were lost at the beginning of the research, likely due to the shock of relocation.

The research was the first to examine differences in the survival and growth between the parents and the hybrid of Caribbean acroporid corals in a nursery setting, along with differences among coral fragment placed in the same locations.

“For coral species that are on the verge of extinction in The Bahamas, growing corals in nurseries is a viable means of preserving genetics, repopulating reefs with these species, and providing habitat to the abundance of life that depends on coral reefs,” said Dr Dahlgran who along with his staff helped to obtain permits for the project, assisted with scouting and setting up nursery sites, coral collections and transportation to the nurseries.

While the parental species have been in decline, the hybrid has persisted on many reefs in the Caribbean with equal or increased abundance, better survival, and equal or less susceptibility to disease and other environmental pressures.

Nevertheless, there is at least one concern. Hybrids could potentially reduce genetic diversity since their quick growth and resilience might disrupt the natural order of things.

“Concerns about genetic swamping of the parental species on evolutionary scales must not outweigh the immediate ecological need for shallow coral reefs, particularly when the state of coral reefs is dire,” the report read.

Researchers believe coral species separated by habitat type and depth could help mitigate this potential problem. The study recommended, “outplanting A. prolifera to shallow back reef areas, A. palmata along reef crests, and A. cervicornis to deeper reef slopes.” Prolifera is the hybrid. Palmata is the critical endangered elkhorn coral and cervicornis is the staghorn coral; both of which are the hybrid’s parents.

The research also noted a major difference between parents and hybrid.

“The hybrid is likely to reach outplanting goals by quickly increasing coral biomass and reef structure, albeit the fused branches of the hybrid taxon may provide a different ecological service than the parental species,” the report read.