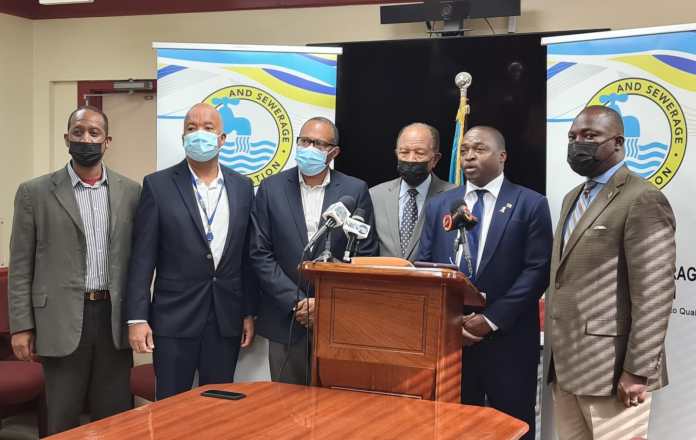 NASSAU, The Bahamas – A diverse board comprising 5 young male professionals representing different walks of life have been appointed to the board of the Water and Sewerage Corporation (WSC). Works and Utilities Minister the Hon. Alfred Sears officially made the
announcement during a press conference Wednesday, December 1 at the Ministry’s headquarters, John F. Kennedy Drive.

The new board comprises: Sylvanus Petty; chairperson; Trajean Jadorette, Alvin Sargent, Brent Ferguson and Kele Isaacs. Minister Sears remarked that the easy availability of potable water is scarce in many communities and having the luxury of potable running water in homes is still a mandate of national development that remains unfulfilled in many communities.

Therefore, the function of the WSC is at the very foundation of national development and human survival. Minister said serving on a board is an act of national service.

“The stipend has no correlation to the work. The quality of judgement that one has to bring — this is an act of patriotism because we are at a time where crucial decisions will have to be made in terms of building resilience, sustainability given where we are and given the fact that The Bahamas is one of the most vulnerable countries in terms of global warming.

“Supply chains can be interrupted again as they were last year in the face of the first wave of the COVID-19 pandemic. We have to work assiduously to secure the supply of potable water that is sustainable and reaches every community,” he said.

Mr. Petty said the board has a lot of work to do but is up to the task. Mr. Donaldson said the WSC takes the responsibility very seriously and committed to doing the best to bring water supply to all citizens.

Minister Sears expressed thanks to the outgoing board for its service to the Commonwealth of The Bahamas.